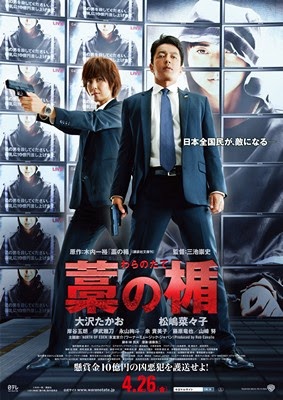 Japan: a seven year-old girl has been murdered. The victim's grandfather announces a one billion yen bounty on the killer's life, and it's up to a small police unit to protect the killer until he can be taken to the district attorney's office in Tokyo and formally charged for the murder. With everyone a potential assailant, including other police officers, it will take a miracle to get the killer to Tokyo alive.

Shield of Straw is a slick, commercial action-thriller directed by Takashi Miike. It's the sort of film that screams 'Hollywood remake' for its first five minutes. If indeed it is remade, I suspect the Hollywood version will have a faster pace and be less morally ambiguous. This will be a shame, because Miike has directed a much more interesting film than it's premise might suggest. It sneaks up on you, disguised as populist cinema, and then king-hits you from behind. In narrative terms, this is a simple movie. In its treatment of the story, however, it's remarkably bleak.

The central issue is this: the movie makes it very clear from the outset that Kiyomaru (Tatsuya Fujiwara), the accused murderer, is not only guilty but is a compulsive and uncontrollable serial killer. He's killed before and will kill again. Thanks to Japan's stance on capital punishment, once convicted he will be executed. The issue then, is not stopping Kiyomaru from dying - it's stopping him from dying now. He's still going to die, and fairly soon, so five police officers put their lives on the line not to save a life but to maintain an orderly and lawful way of doing things. That's a much more difficult rationale for which to take a bullet.

The film runs along a chain of set pieces: they originally plan to fly a plane, but then discover someone has sabotaged the plane to score the billion yen bounty. Then they're going by armoured truck with escort, leading to more than altercation on the freeway. Then they continue by train, and then, and then... it's a long film, perhaps 15 minutes too long, but Miike directs each sequence with a great eye for suspense and stylish camerawork.

Tatsuya Fujiwara is excellent as Kiyomaru, although to be honest it's a kind of role he's played before (Light in Death Note, for example). Also great are Takao Osawa and Nanako Matsushima as the two police protection officers whose morality is challenged as the film's body count racks up and their mission grows more pointless and desperate.

Viewers fearing that Shield of Straw might shock and scar them like Audition did can rest easy: this is a much more commercial and mainstream work. The hollow nature of the mission eats away at you, however, and you do start questioning: what would you do? Would you let Kiyomaru live?
Posted by Grant at 2:19 PM