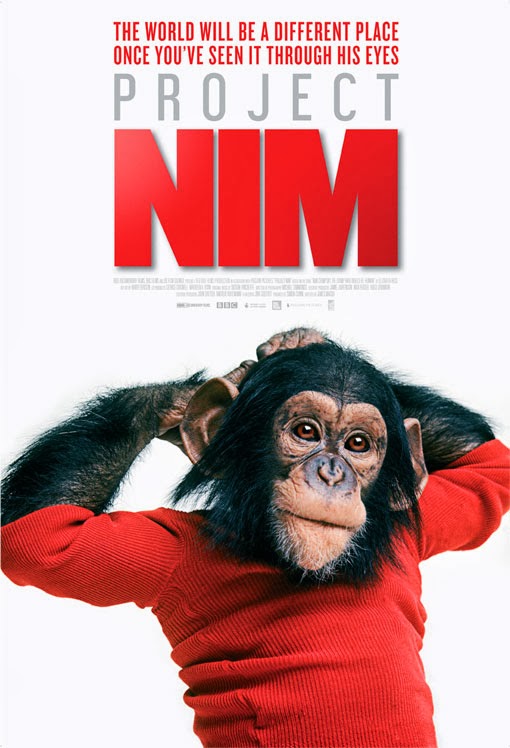 In 1973 a research project at Columbia University placed an infant chimpanzee within a human family, in an attempt to determine if a chimpanzee - once instructed in sign language and surrounded by people - could form and use its own language. A newborn chimpanzee was taken from its mother and named Nim Chimpsky (a joke based on theorist Noam Chompsky). Project Nim is a 2011 British documentary directed by James Marsh that tracks this project, its failings, and the life story of its titular chimpanzee.

Project Nim is simultaneously a profile on bad science and an act of waiting for the inevitable. The various human participants are all interviewed throughout the film, talking heads-style, and its immediately surprising just how self-incriminating they all are. Project head Herb Terrace comes across as a self-involved lothario, less interested in his experiment than in the fame and status it might bring, and the graduate students he might seduce. Nim's original carer Stephanie openly (and bizarrely) talks of how sensual she finds caring for him, despite the project effectively ruining her marriage. As the film develops, attempts to teach Nim to communicate are complicated as he gradually matures into an intelligent, potentially violent and extremely dangerous wild animal. Once it's clear that Nim isn't going to provide what Dr Terrace needs, he's effectively abandoned. This leads to a very depressing second-half to the film.

The inevitable part of the film is the part where, as viewer, you wait for the moment when Nim stops being a cute, cuddly baby animal and starts becoming a violent predator. Chimpanzees are terrifying animals. In the wild they've been known to engage in gang rape, pre-meditated murder and cannibalism. They may be smart, social animals, and genetically very close to humans, but they are not beyond attacking, injuring and even killing human beings. The first half this documentary is an increasingly tense ticking alarm clock, as we wait for the nature-versus-nurture to end with nurture getting violently assaulted.

The hero of the film is Bob Ingersoll, who never gives up on Nim even through the collapse of the experiment and the subsequent years of medical experiments and isolation. I am so grateful for his presence in Nim's life, and the profound impact he makes on it. The other most interesting individual in the film is of course Nim himself. While he may have failed Terrace's intended experiment - although to be honest I think it's debatable whether or not he did fail - he clearly has affection for and a connection with the humans around him. He may not communicate with humans in the manner they want him to, but throughout the film he's sociable, emotional and intelligent. It makes the realisation of how artificial, unfair and cruel his life was all the more upsetting.

As a documentary, Project Nim is perhaps a little too talky. Archival footage is used where available, but there are still a lot of talking heads. Marsh does wisely stay silent throughout, and allows the various players in Nim's story to explain what they did, how they felt and - more often than I expected - casually reveal their deep failings in their numerous interactions with him. The story Marsh compiles is a very important one, and addresses both the ethics of experimenting with animals as well as the contact and connection that can be made between one species of ape and another. Many parts made me extremely angry. A few key moments touched me very deeply. This is a worthy, valuable documentary.
Posted by Grant at 7:49 AM