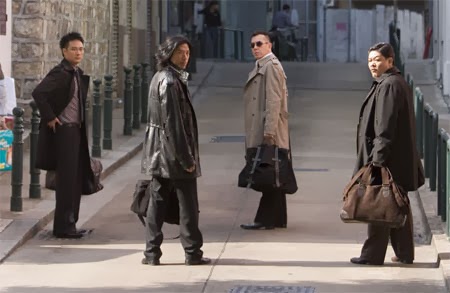 Johnnie To knocks the ball out of the park once again in Exiled, a crime thriller with a delightfully off-kilter edge. Managing to tread a fine line between multiple genres – action, thriller, drama, comedy – it presents us with a stunning story, a great cast of characters and one utterly memorable and wildly enjoyable film.

It starts in Macau, on the eve of that city’s handover from Portugal to China. Two pairs of hitmen turn up awkwardly at the same address: one pair to murder a runaway from the Hong Kong underworld, the other to protect him. Embarrassingly, all four mobsters have known each other since they were young men. They wind up having dinner with their protectee/target and his wife. For at least two of them, this upsets their boss – who was previously the victim of an assassination attempt by the target. Things rapidly spiral out of control from there.

Exiled is a marvellous film based on nothing but cause and effect. The actions taken in one scene lead to the next, in a fashion that is certainly logical on a scene-by-scene basis but when seen as a whole becomes delightfully difficult to predict. For the four hitmen, their situation becomes so difficult and uncertain that at one point they resort to flipping a coin to make decisions.

Exiled is grounded by four great central performances, particularly Anthony Wong as Blade, who becomes the team’s de facto leader and the man most responsible for their fates. Simon Yam guest stars as his erstwhile master, Boss Fay, and gives a typically solid and entertaining performance as the villain.

The action scenes are remarkably inventive. In 2008, while promoting Indiana Jones and the Kingdom of the Crystal Skull, Steven Spielberg talked about how action cinema can be directed for geography – shot in a manner where the audience can see exactly who is doing what and where – or for emotion – where the audience can’t really determine precisely what’s happening, but gets the full emotional brunt of what it would feel like to be shot at, or punched in the face, or whatever. He cited Indiana Jones as an example of the former, and The Bourne Identity as an example of the latter. With Exiled, Johnnie To proves that you can do both at one. The gunplay is cleanly shot, but adds a remarkable edge of realism too: within seconds most rooms become so filled with smoke and flying bodies that the characters can’t make head nor tail of what they’re wildly shooting at. It’s chaotic, unexpected gunplay in a film with a chaotic, unexpected story.

The Macanese setting is a wonderful one. In many ways Macau is a half-forgotten step-sibling to its neighbour, Hong Kong. It’s handover from Portugal to China was just as stressful as the handover of Hong Kong, but by and large it failed to gather as much international attention. Macau is one beautiful city, with a lot of traditional Portuguese architecture. It helps Exiled visually stand out from the crowd.

It’s rare to find a film that succeeds on so many creative levels, that is unexpected, original, funny, touching and exciting. It’s boosted by extraordinary performances across the board, and wonderful sort of western-inspired musical score. It is, quite simply, one of the best-ever films from one of Hong Kong’s – no, the world’s – best ever writer/directors.

This review was originally published on the Eiga: Asian Cinema website.
Posted by Grant at 10:35 AM