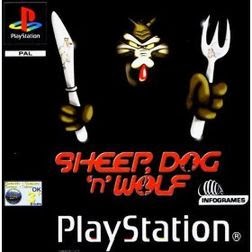 This pick is maybe a contentious choice, given the large number of original IP created for the PSX. Despite that, I simply can't go past it. Sheep, Dog 'n' Wolf (released in the USA as Sheep Raider) is an adaptation of Warner Bros' iconic animated shorts in which a wolf strives to steal sheep from under the nose of an ultra-vigilant sheepdog. Now videogames based on cartoons are a dime a dozen. They're generally generic platformers and they are - almost without exception - generic cookie-cutter cash-ins, produced without inventiveness and enthusiasm and relying purely on their connection to a popular cartoon to sell the product.

This one's an exception. It's got a lot of clever gameplay, and unlike most adaptations it positively nails what it is that makes the original shorts so entertaining.

One of the biggest things that makes Sheep, Dog 'n' Wolf work is the sound. We tend to overlook sound in videogames, unless it particularly annoys us. The sound here is perfectly adapted from Looney Tunes: the notes play as you sneak around, step by step, as if Carl Stalling himself composed the score. It goes a long way to making you feel like you're playing a cartoon.

In terms of gameplay, it has a wonderful balance of puzzles, strategy, stealth action and platforming. It's quite a forgiving game, and most times that you screw up you get a few seconds to scramble for safety before Sam the Sheepdog is on your heels and pummeling you violently.

This game came quietly in 2001 and slinked away like Ralph the Wolf stealing a sheep inside a fake shrub. It doesn't make a lot of "all-time best" lists for the PSX, but I'm enormously fond of it, so it can be my #19.
Posted by Grant at 11:28 AM