Who50: "Remembrance of the Daleks" 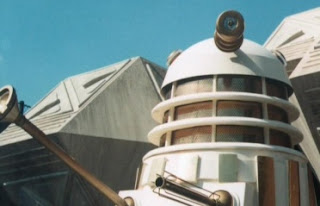 Who50 counts down to the 50th anniversary of Doctor Who by reviewing my favourite episodes and serials over the history of the programme, counting down from #50 to #1. Today, #19: "Remembrance of the Daleks", a 1988 four-part serial written by Ben Aaronovitch and directed by Andrew Morgan.

I always found it funny that Doctor Who's 25th season featured an officially declared 25th anniversary story, "Silver Nemesis", that featured silly Elizabethan time travellers, a talking statue, elderly Nazis and a very small-scale Cyberman invasion of Windsor, and in the same season but not representing the 25th anniversary, was this outstanding four-part serial featuring the return of the Daleks, fresh questions about the Doctor's past and true identity, UNIT-style action and a period setting in Coal Hill Secondary School where Doctor Who started all the way back in 1963.

"Remembrance of the Daleks" is a dense, continuity-heavy adventure, steeped in the series mythology but at the same time desperate to introduce new ideas into the mix. It could have featured UNIT, but instead (and likely due to its 1960s setting) features the hitherto-unseen British Countermeasures Group - further expanding and enriching the back story of the show. (Had Doctor Who not been cancelled the following year I would have adored a return appearance from Group Captain Gilmore and his team.) Likewise, it could have simply featured the Daleks being Daleks, pure and simple, but instead built on Eric Saward's "Revelation of the Daleks" to create two rival Dalek empires, as well as the tank-like Special Weapons Dalek and a long-awaited ability to gravitate up stairs.

Visually it represents a big leap forward in quality. The period setting allows the series to dive into the sort of thing that the BBC's set and costume departments used to do best, while the visual effects team wring every penny they can out of the limited production budget. When Doctor Who returned from its 18 month hiatus in 1986 it started to use video cameras for outdoor broadcast, rather than the film used in previous seasons. The result had been a decidedly ropey-looking two seasons for the program. Here, in the Season 25 premiere, director Andrew Morgan finally gets the video look to work, and the result is pretty much the best-looking Doctor Who story of the Sylvester McCoy years.

And if that wasn't enough, Ace gets to fight Daleks with an electrified baseball bat and a bazooka.

I never stopped enjoying Doctor Who in the 1980s, but I do remember thinking at the time that the series hadn't been this good in a very long time. 25 years later, and it's still one of my favourites.
Posted by Grant at 10:41 PM