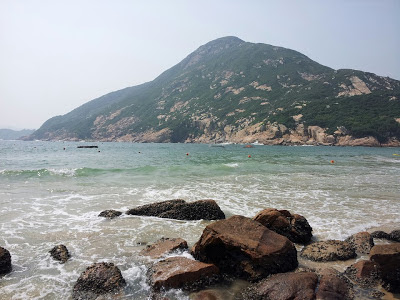 Hong Kong is a crazily busy city, and it often doesn't take long there for the average visitor to start craving a bit of piece of quiet.

Last October I was delighted to visit Shek O, which was - in mid-morning on a weekday - delightfully peaceful and quiet. It's a seaside village on the south-east corner of Hong Kong Island, and has pretty much all the open air cafes, corner shops and deckchair vendors you would expect from a seaside village. It's also got a lovely view of the South China Sea.

I didn't go swimming - to be honest, any city where they recommend you check the paper for daily pollutant levels before jumping into the ocean is probably not a city where it's worth going for a swim. For the record, the Hong Kong SAR government rates the beach quality as "Grade 2", which is pretty much average as it's a three-point scale. The beach is fitted with a shark net.

While I didn't try swimming, I did have an explore over the rocks: you can see them in the photograph above and they're populated with a charming species of colourful blue crab (all of whom moved far too quickly to photograph.


This all might seem a little dull, but to be honest the real reason for going to Shek O is the bus trip there. It takes a winding route along the southern edge of Hong Kong, rattling along narrow forest-filled hillsides at a tremendous speed. If you can manage it, climb upstairs to the top of the bus and try to score a seat at the very front. The view is tremendous, and gives you a look at a side of Hong Kong that tourists don't always frequent.

If you're particularly keen, there's also a walking trail that runs over the top of the hills behind Shek O and down again to the suburb of Chai Wan. I tried it once when I was there last year, actually walking in the opposite direction, but quit after a scare with an Indochinese grass snake (a harmless but unexpectedly fast snake that can grow to two metres in length).

Disabled Access: obviously disabled travellers won't find it too easy climbing up to the top of the bus, and the walking trail back over to Chai Wan would be entirely out of the question. Shek O itself is pretty level with paved roads and footpaths, but the sand will give you as much trouble as any typical beach.
Posted by Grant at 10:42 PM