It's been a while since I reviewed any of the smaller online comics I've been reading via Comixology: here's a look at one that I've read recently and which I think really deserves your support. 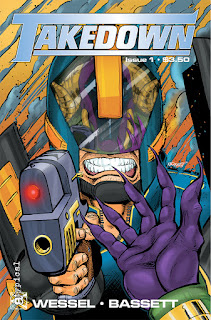 Geoffrey D. Wessell is an extremely promising comics writer who's been circling a professional breakthrough for a while now: his webcomic Keeper has been a wonderfully provocative and original title, combining professional football with serial killer horrors. This new one-shot, featuring art by Zach Bassett, is a wonderfully knowing pastiche of British comics anthology 2000 AD, in particular their headline character Judge Dredd.

The official solicitation text reads: 'Officer Josiah Bledsoe is one of the toughest cops in the Department of Adjudication. But his limits will be tested with the return to Earth of the Star Corps traitor who ruined his dreams, and is now the right hand of the dreaded Nebula Empire! Be here for the TAKEDOWN of a lifetime!'

Of course being heavily influenced by Dredd doesn't mean that Takedown is just a disposable copy or fan fiction: it's nothing of the sort. This is a tightly written, engaging drawn science fiction story, with a beginning, middle and end, jammed into 22 pages and sold on Comixology for less than a dollar. I think there's a real talent in writing a one-shot comic book, and Wessell is definitely showing his ability here. I'd be quite happy to buy one-shots of this quality from Atypical Comics every week. Zach Bassett's artwork services the story well. The comic's interior is in black and white, which only helps to create that authentic 2000 AD feel.

Don't go into this book with false impressions: this is an early work by two up-and-coming creators. Rank it up alongside the very best that's getting published from Image, Fantagraphics and Top Shelf and it's probably going to come up wanting. As an early-career start, however, it can't be faulted: this is a fun, smart, engaging read - and at 99c it's ridiculously good value. (4/5)
Posted by Grant at 2:58 PM