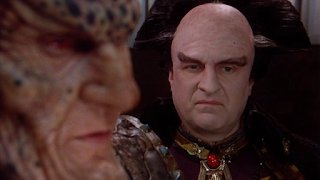 The Narn-Centauri War, which has been boiling away all season, finally comes to a tragic end with mass casualties, mass drivers and the Centauri conquest of the Narn homeworld. Meanwhile, Sheridan and Delenn are invited down to Epsilon 3, the planet around which Babylon 5 orbits, to meet with Delenn's old mentor Draal.

"The Long, Twilight Struggle" has two plotlines in it. The first, which follows Sheridan and Delenn down to Epsilon 3, is pretty tedious to watch, particularly because Draal (John Schuck) is written and played with a light-hearted touch, and he's not amusing in the slightest. So let's overlook that aspect of the episode and concentrate entirely on the conclusion of the Narn-Centauri War, because that thread is genuinely tragic and high-quality drama of which the Babylon 5 team should remain very proud.

It's quite a profound experience to look at the characters of Londo and G'Kar, and compare them between "Midnight on the Firing Line" and "The Long, Twilight Struggle". G'Kar has transformed from a swaggering, untrustworthy boor into a deeply tragic and mournful shadow of his former self. Londo has changed from being a figure of fun - a blustering representative of a weak and fallen power - into another broken man, only for different reasons and with a different result. For G'Kar there can be no victory, but for Londo there can be no escape.

There are two perfectly drawn scenes in this episode; one for Londo and one for G'Kar. For Londo, there's the beautiful moment - obvious enough to be recognised but subtle enough not to get in the way - as he watches the razing of the Narn homeworld from orbit, and a shadow falls over his face. For G'Kar there's the long, humiliating walk out of Babylon 5's council chamber, never to return.

When Babylon 5 gets things wrong, and it gets them wrong with tedious regularity, it's quite a difficult show to watch. When it gets things right, however, it really does have the potential to hit the ball out of the park. "The Long, Twilight Struggle" is one of the hits.