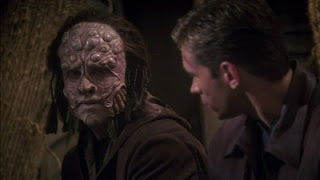 Captain Archer and Commander Tucker find themselves trapped on a prison ship bound for the penal colony of Canamar. While the Enterprise crew race to find and rescue them, they must negotiate through a dangerous prisoner revolt on the prison ship if they are to escape with their-

As a result of this repeated plot duplication I'm finding it difficult to think of anything of note to say. "Canamar" is as generic as Star Trek episodes get. It's a filler; an episode designed with no purpose other than to take up a production slot and help the series towards its 26-episodes-a-year contract with the TV network.

It's worth noting the Nausicaan, I suppose: a semi-obscure alien race from The Next Generation given a guest appearance. That's about it, though.

It's episodes like "Canamar" that betray Enterprise's roots in the 1980s. By this point there had been a Star Trek series running on American television every year since 1987, and it shows: in the 1980s the syndication market required episodes to be self-contained with no repercussions outside their respective 45 minutes. By the time "Canamar" is broadcast, Star Trek is still running on a broadly similar model while American television has quietly evolved around it. Story arcs are the standard rather than the exception. People are beginning to buy seasons of TV dramas on DVD and binge-viewing them over a weekend. "Canamar" shows that, while American TV is evolving Star Trek resolutely is not, and I think it's that resistance to change that winds up scuttling the series after four seasons.