Babylon 5: "The Fall of Night" 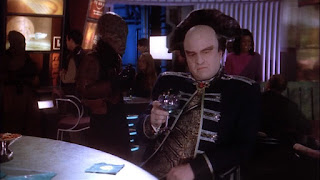 A representative from Earth's Ministry of Peace finally arrives on Babylon 5 to address the Centauri situation - but the answer may not be the one Sheridan is hoping for. A Narn cruiser jumps into orbit around Epsilon 3 with a request for sanctuary - but if the Centauri discover it is there all hell may break loose. It all comes together in "The Fall of Night", the Season 2 finale of Babylon 5.

The advantage of arc-based television drama is that you regularly get episodes like this, where a string of emotional payoffs can be lined up in a row, and without too much in the way of a self-contained narrative the episode can still feel immensely satisfying. Here we get big developments regarding Earth's government, the coming war with the Shadows and - perhaps most strikingly - precisely what Ambassador Kosh looks like inside that encounter suit.

This is exactly the kind of season finale that I like: one that does have a strong sense of closure, doesn't hang open with an enormous cliffhanger at the end, yet still sets things up for the year ahead. "The Fall of Night" achieves all of these things with aplomb. There's a lot in this episode that is heavily telegraphed in advance - Earth's non-aggression treaty with Centauri, Zack's ambivalence over his membership of the Night Watch - but despite this it is satisfying to see all the pieces drop into place.

There's a heavy layer of World War II references in this episode. Roy Dotrice guest stars as Lantz, the Earth ambassador sent to negotiate peace with the Centauri. It's so visibly derived from Neville Chamberlain appeasing the Nazis that Straczynski even has Dotrice state the famous "peace in our time" line that pretty much ended Chamberlain's career. At the same time the Night Watch are allowed some none-too-subtle similarities to Nazi Germany, as they shut down one of the station's traders for apparent sedition against the Earth government.

The revelation that Vorlons look like whatever each individual culture in the galaxy perceives as angels opens a nasty can of worms for the future. How long have they been around? What have they been doing to the various intelligence species of the galaxy to make them all think of a naked Vorlon as a god?

And poor Lieutenant Keffer: forced into the series at the behest of Warner Bros, disregarded for most of the season by Straczynski, and now unceremoniously killed in order to introduce the Shadows to the galaxy's civilizations-at-large.