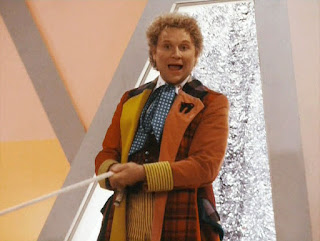 Here we go: my three least favourite Doctor Who stories.

This is absolutely the worst serial of Doctor Who's first 26 seasons. It's amateurishly written, badly directed, gaudy and excessively colourful, and performed by actors either inexperienced and wooden or - particularly in the case of Paul Darrow - overacting to such a remarkable degree that they sabotage the drama and turn it into unintentional comedy.

The use of H.G. Wells as a fictional character, and the implication that the events here inspire him to write all of his literary works, is a dreadful cliche that Doctor Who had - until this story - somehow managed to avoid. David Chandler is hysterically awful as "Herbert", just to add insult to injury.

Poor Colin Baker. He was - and is - a fantastic actor, and had the potential to be a marvellous Doctor. Via Big Finish's audio dramas he's had the chance to prove that, and it's just a shame that so many of his televised adventures were as awful as they were. 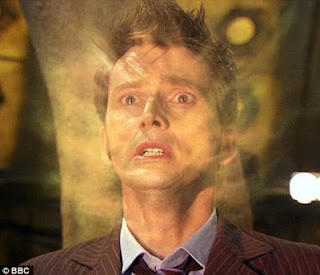 The end of a Doctor's life is a momentous occasion. He might die saving the entire universe, like Tom Baker in "Logopolis". He might die saving a single life, like Peter Davison in "The Caves of Androzani" or Christopher Eccleston in "The Parting of the Ways". Whatever the cause, the Doctor's death should be a cue for the viewer to be sad at his departure and wish that he could have stayed around for maybe just one more season. What it's not supposed to be a cue for is for me to roar in frustration, ten minutes into the incredibly prolonged death of David Tennant's Doctor, watching him whimper that he doesn't want to leave and screaming "oh for fuck's sake just die!!" at the top of my lungs.

If there's an opportunity for "The End of Time" to be self-indulgent, it takes it. Very little happens in the first half. The Doctor cries and does very little, the Master is resurrected then has an hour-long run around a slag heap, Wilfred Mott reunites with the Doctor and they both have a cry. Then in the second half there's the sudden revival of the Time Lords, just long enough for the Doctor to be indecisive before sending them all away as quickly as they arrived, and then bitches for a few minutes about having to sacrifice his own life to save Wilf's. It's un-Doctorlike, that bitching. It's a small betrayal of the character, not so big that it derails the series but certainly big enough to make the actual episode a pain to watch.

And then he won't die, because he needs to have final little scenes with all of his companions, and then a slow, dragged out stagger towards his TARDIS with the orchestra and chorus blaring away in the background, and then cries a bit, because he doesn't want to go and for fuck's sake just die.

The worst excesses of this story are easily worse than the worst bits of my #1 choice, but what gives "The End of Time" rise that one spot is the odd little glimmers of brilliance littered through it: irritating little moments that make you realise this could have been something quite special if the writer and production team had bothered to make it. 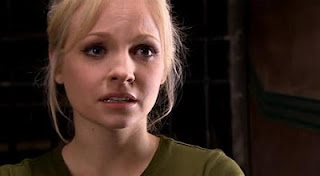 Oh good God, where do I start? How about with Georgia Moffett, strutting on screen out of a cloning machine with mascara on, looking all coy with her enormous gun and saying "hello dad!" to one of several people in the room who could have easily provided the genetic material to make her? How about the following 40 minutes, as the Doctor randomly acts like he despises Jenny's very existence in a manner that defies his personality for the preceding 45 years? Or maybe it's the bit where Martha bawls her eyes out because a fish man she's known for approximately six minutes apparently drowns in a puddle of water. A fish. Drowning. In water. Never mind she survived the entire months-long reign of the Master over the Earth in "The Last of the Time Lords", or that she's become an advisor to a military strike force fighting Sontarans - now a fish man vanishing into a pond is enough to send her bawling her eyes out and resolving to never travel through time and space again. 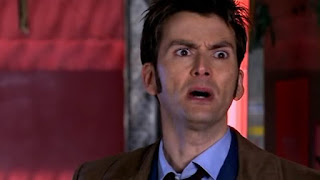 "The Doctor's Daughter" is an episode seemingly written with no purpose other than to drive me up the wall and give me the shits. I'm straining to find words that can describe how awful and tedious I found the character of Jenny, or how over the top the Doctor's reaction to her death is: he's been resenting her existence for the whole episode, then when she dies he bursts into tears and threatens to shoot her murderer with a gun. Had Stephen Greenhorn even seen Doctor Who before he wrote this episode? Did no one question how awful it was before they shot it?

This is an episode where none of the regular cast behave the way they're supposed to, and where some of the Doctor's genes manage to create the most irritating guest character of all time. And then she dies because if there's one thing Doctor Who needs more of it's David Tennant having a cry in the rain. And then she comes back to life, because apparently if there's one more thing the worst episode of all time needs it's the threat that some time in the future she might actually come back.
Posted by Grant at 9:28 AM