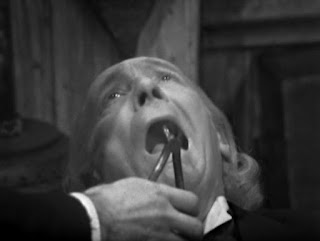 Another day, another four stinkers. This time we're counting down from #10 to #7 with William Hartnell and Peter Davison.

Doctor Who does a western. Badly. Oh okay, you want more? There are two big problems with this serial as I see it. The first is that rather than go for an earnest attempt at a British TV western the production team goes for comedy, and the comedy simply isn't funny enough to justify its existence. Secondly, the western is a genre of open plains, big canyons and prairies, and the production team is attempting to replicate that in a studio the size of a large suburban living room. It just doesn't work.

The notorious song that plays out in the final episode doesn't actually bother me all that much: after three episodes of television this dull and awful, why the hell don't they finish with a song? It's more interesting than anything else in this serial.

Okay, so let's not be uncharitable. This serial does have almost certainly the best giant space chicken in the history of science fiction television. Asides from that, "Arc of Infinity" is a nonsensical farrago of false tension, farcical science and shoddy production values with the most obvious secret traitor I've ever seen. It relies on ridiculous coincidences to move the plot forward, and after we'd finally thought we were rid of Tegan bloody Jovanka, she randomly turns up again in the very next story.

One enormous casualty of this story is the planet Gallifrey. In "The Deadly Assassin" they looked like the Vatican, in "The Invasion of Time" they looked like a bureaucracy, in "Arc of Infinity" they look like a sparsely populated shopping centre. No wonder Russell T Davies took the Time Lords out of their misery. 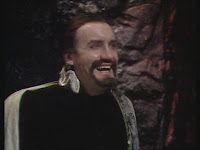 Poor Ron Jones. Before being saddled with directing "Arc of Infinity" he got saddled with this: a bland yet silly romp across some poorly constructed sets with bad dialogue, a nonsense plot and some terrible guest performers. The whole exercise is based around being able to use the Concorde airliner, which to be honest wasn't even that exciting when I was a child.

Then there's the Master, who spends the entire first half of the story in disguise as an Arabic caricature despite being on his own with no direct contact with the rest of the cast. So who the hell is he disguising himself from? Does he just cosplay for the hell of it when he's on his own? Plus it's only the third appearance of Anthony Ainley's tremendously over-acted Master and he's already outstayed his welcome. 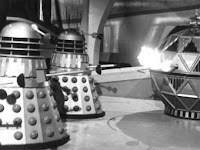 In 1963 the Daleks become Doctor Who's break-out hit. In 1964 they invaded London, which was a stunning move that generated a great story. In 1965 they're back for a third time, only this time Terry Nation doesn't care about what he's writing and the production team seem happy to just have another six weeks of Daleks to boost the ratings.

The biggest problem with "The Chase" is that it simply doesn't hold together. Week after week the TARDIS team run away, and week after week the Daleks follow them to wherever they've gone. It's rapidly tedious, and there's no way to build up any proper drama because asides from the Doctor, Ian, Barbara and Vicki, there's no one with which to generate drama. Things pick up quite a bit in episode 6 with the introduction of the Mechanoids and the superb Steven Taylor (Peter Purves), but by then it's a case of too little too late.
Posted by Grant at 3:03 PM