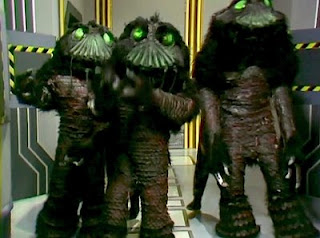 Another five awful Doctor Who stories. Rather than write a lengthy introduction, how about I simply dive straight in?

There's a big problem with Season 17 of Doctor Who, in that everybody wants to make it a comedy. As lead actor, Tom Baker had always injected comedy into his performance. Stacked on top of that were scripts edited by comedy writer Douglas Adams. Stacked on top of that are a chain of guest casts who clearly believe a script filled with jokes and absurd situations are best served by 'hilarious' over-acting. Double-digit inflation in the UK has also meant that the series (whose budget hadn't increased in three years) looked cheaper than ever.

There is much to recommend in "Nightmare of Eden", notably the bonkers premise (dessicated aliens can be snorted as a drug), but there's also much that drags it down, including some of the worst-looking aliens in Who history and some of the worst acting as well - Lewis Fiander as Professor Tryst is a key offender. 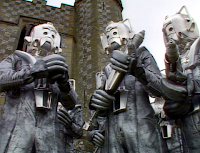 The problems that drag "Nightmare of Eden" down also drag down "Silver Nemesis", Doctor Who's nominal 25th anniversary special. For one thing it has a crazy number of plot elements, none of which particularly fit together: a time-travelling Elizabethan woman, an ancient Gallifreyan superweapon, a Cyberman invasion of Windsor, and Nazis. On top of that is some plainly painful attempts at comedy. On top of that it looks, like "Nightmare of Eden", ridiculously cheap.

What's particularly galling is that the episode's climax - in which the Doctor used a Gallifreyan superweapon to trick an old foe into destroying themselves - had not only been done before, it had been before three weeks earlier in "Remembrance of the Daleks". 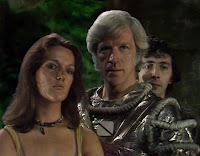 Two Bob Baker scripts in one blog post - what makes that particularly funny is that Baker would go on to write an Academy Award-winning movie. Part of the difficulty in enjoying "Underworld" is in its visual effects. The story attempts to bypass costly and unconvincing sets by having the actors perform in front of a blue screen with the backgrounds inserted via chromakey. It may save money but it's unconvincing as hell.

Jarring visuals wouldn't be an issue if the script was any good, but sadly this serial is four episodes of humourless, slow-paced nonsense cribbed from the legend of Jason and the Argonauts. Doctor Who would attempt this sort of thing again two years later with "The Horns of Nimon", but at least in that instance the result was gut-bustingly funny. "Underworld" doesn't have that luxury. 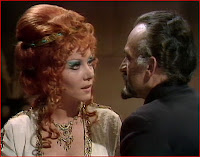 I honestly can't sit through "The Time Monster". It's a four-episode story that's been squeezed into six episodes. It's all over the place. It is the seventh serial in ten to feature the Master as the villain, and is the first time - despite Roger Delgado's wonderful performance - that it's tiresome that he's there, once again, like a cranky gardener who's been rumbled in an episode of Scooby Doo. Then there's the sight of Sergeant Benton in a nappy. Stories like this are why Doctor Who can't have nice things. 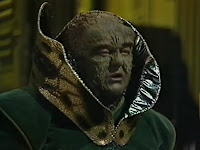 Terence Dudley was a director-turned-writer, and from the evidence of his Doctor Who writing he probably should have stuck to directing. "Four to Doomsday" is ridiculous and stupid. The cast do their best to make it work, but despite their talent can't quite overcome the monumental stupidity of it all. For those who can't quite remember it, it's where a giant insane frog wants to travel faster than the speed of light so that he can go back in time to the beginning of the universe and meet himself as a God.

He also has a collection of androids made in the image of humans he has kidnapped from Earth over thousands of years, and plans to wipe out all human life with a deadly virus. How this ties into his long-running plan to become a God, or why he bothered to kidnap humans when he intended to murder them all anyway, and why he makes several trips to Earth over thousands of years and only now wants to kill us all, are all questions that are never answered here.
Posted by Grant at 9:35 AM