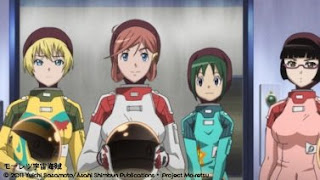 Marika and Chiaki fend off the hackers from taking over the Odette II's systems, then take their yachting examination and finally set off with their class on a sail around Tau Ceti.

You're possibly waiting for a "and suddenly they are attacked by pirates", or somesuch; certainly I spent most of this episode waiting for the exciting action to kick in. It doesn't. This is an oddly sedate episode, spending its time on the characters in a more relaxed setting rather than filling the screen with explosions and chases. It isn't bad, it's just a bit unexpected. With another 23 episodes to go, it's probably a smart idea to ensure the audience really do know who the characters are and what they're like.


One thing that did strike me with this episode was a notable drop in the quality of animation. Bodacious Space Pirates was made for television and therefore lacked the budget to create too much stunning eye candy. I didn't really notice the limitations in the first two episodes: I suspect they had a higher production budget to impress a new audience. Now that the audience is (in theory) hooked on the show, there probably wasn't a need to throw so much money at it going forward. It's not ruining the series by any stretch, but it is something I noticed.

There are some genuinely funny highlights: I particularly adored the yachting class and their colourful space suits. If space travel becomes a hobby industry for teenagers, of course there are going to be glammed-up spacesuits in bright colours.

The cast appears to be growing rapidly for this series, and that actually is a problem. I am engaging with Marika, the series lead, and I'm getting to know and really like the deadpan Chiaki. Beyond them I find I'm labelling the cast by what pre-existing anime characters they look like, like "not-Rei from Evangelion" or "not-Sailor Moon". Getting an audience to remember and identify a large cast is a significant challenge and, so far, I'm not sure that Bodacious Space Pirates is managing it.

This is an enjoyable episode. It's not brilliant, but I didn't feel like it wasted my time. That gives this anime two good episodes out of three, bouncing the series up to 67%.
Posted by Grant at 9:14 AM