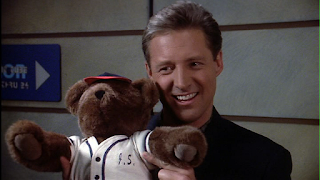 Just as common wisdom would have it, Babylon 5's second season is definitely a step up from its first. I think a large part of that is the reduction in the number of non-arc-related episodes written by people other than J. Michael Straczynski. He's still a very uneven writer, but he definitely (and understandably) has a better handle on his own series that other writers do.

Another big change in Season 2 was definitely replacing the deliberately calm, closed character of Jeffrey Sinclair with the far more emotional, open and humorous John Sheridan. Bruce Boxleitner energises the series with his presence, and seems to allow a lot of the regular cast to shine a bit more as well - either that or they're simply a lot more comfortable in their roles in the second year.

The rest of my thoughts are, as with the Season 1 review, probably best summed up in dot point.


So which stories were the good ones? I'd have to say the top 5 for me were (in broadcast order):
Refreshingly, there were only two episodes in Season 2 that I genuinely hated. They are:
I'll be taking a break from reviewing Babylon 5 so that I can catch up on reviewing some other shows, but I will be back - sooner or later - with my thoughts on Season 3.