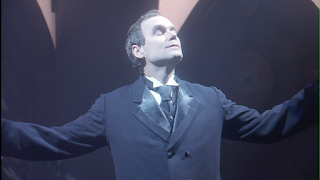 As the horrible reality of the Centauri occupation of the Narn Regime sinks in, Delenn is visited by a mysterious inquisitor who works for the Vorlons. Sebastian, a 19th century Englishman kidnapped from Earth centuries ago, will push Delenn to her limits to demonstrate her worth to lead the fight against the coming darkness.

I want to jump ahead of pretty much the entire episode, to focus on the final denouement. Sheridan challenges Sebastian just as the inquisitor is about to board the Vorlon starship, and Sebastian essentially confirms that he is fact the 19th century serial killer known as Jack the Ripper. I found myself quite taken aback by this revelation, and more than a little disgusted. I'm still attempting to unpack whether my reaction is fair, or excessive, or nonsensical, but I can't deny I was very angry at the use of Jack the Ripper for what is essentially a bit of populist entertainment.

Jack the Ripper was real, and more importantly his victims - Mary Ann Nichols, Annie Chapman, Elizabeth Stride, Catherine Eddowes and Mary Jane Kelly - were all real women. They lived real lives, suffered real hardships in 1880s London, and they all suffered horrifying brutal murders at the hands of a man who was never identified and never arrested or convicted for his crimes. Maybe there should be a statute of limitations for getting offended over this sort of thing - when this episode was produced the women had been dead for more than 100 years - but they were still real people, and they did suffer genuinely appalling deaths. For these awful events to be thrown in not just as entertainment but as a throwaway line feels disrespectful. It feels deeply tacky, and it left a bad taste in my mouth that ran roughshod over the rest of the episode.

Putting that massive caveat aside, "Comes the Inquisitor" is essentially Straczynski's second run at remaking The Prisoner in Babylon 5. He tried in Season 1 with the highly similar "And the Sky Full of Stars" (in which Commander Sinclair was interrogated for an entire episode). Discussing that episode back in March 2012 I noted that: 'I think it's too busy being cute with evoking The Prisoner that it forgets to be a decent commercial hour of TV drama in its own right.' That observation is, to be honest, largely true here. It's certainly a more effective attempt, and fits into the broader Babylon 5 universe a little better, but it's still a knowing, nudge-and-wink tribute that constantly runs risk of tripping over itself.

It should be noted that Wayne Alexander does a very good job as the theatrical, overly dramatic Sebastian. The idea that the Vorlons would hijack individuals from primitive planets and use them for centuries as their representatives is a great one, and he cuts a distinctive figure walking through the station with top hat and cane. It's just a shame they pushed it that one step further - once you realise he's Jack the Ripper he just feels tacky, foolish and utterly ridiculous.

There is a beautiful scene in this episode, in which Centauri ambassadorial aide Vir finds himself in an elevator with G'Kar. It's a wonderful series of moments, moving from Vir's awkward terror to his clumsy attempt at an apology to G'Kar's chilling note that the decimation of the Narn is not something Vir can apologise for. It is slightly odd that, in a series with plenty of human protagonists, it's the Narn and the Centauri that are providing the majority of the series' nuance and character.

So, with one massive caveat, I'm going to give a tick of approval to "Comes the Inquisitor". It's a deeply flawed episode, arguably critically so, but it's got so many great moments and touches that it remains a worthwhile viewing experience. 13 good episode out of 21 gives Season 2 a rolling score of 62%.
Posted by Grant at 7:00 PM