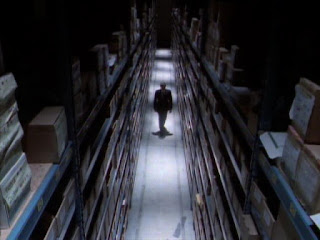 It's been 20 years since The X Files first broke onto television screens. These days it's remembered, and rightfully so, as one of the most significant and popular American dramas of all time, so it's actually a little hard to go back and rewatch the pilot episode as if you don't know what's coming. I have attempted to do my best.

Medical doctor and FBI academy instructor Dana Scully is enlisted by an FBI section chief to join Special Agent Fox Mulder on the "X Files", FBI cases that defy explanation or traditional investigation. Her task in not just to assist him, but also to report back on the validity of his work. Together they travel to northern Oregon, where a string of deaths in the woods have failed to be explained.
Series creator Chris Carter always described The X Files as his love letter to Kolchak: The Night Stalker, a cult horror series of 1970s. I always found this a slightly odd thing to say, since there are many much more obvious inspirations for this series. Dana Scully, as played by Gillian Anderson, is as close a replication of Jodie Foster's Special Agent Clarice Starling (The Silence of the Lambs) that you're likely to find. Similarly the straight-faced intimations of big government conspiracies are straight out of Oliver Stone's JFK. In terms of visual tone, the series owes a great deal to David Lynch's Twin Peaks - certainly it's the most cinematic television show since that series.

Just to illustrate how distinctive The X Files was, even at its launch, let's briefly have a look at the other genre series that the Fox Network premiered in 1993. The Adventures of Brisco County Jr was a slick, light-hearted western comedy series starring Bruce Campbell. It was expensive, heavily advertised, highly televisual - and of course a disastrous flop. In the meantime The X Files sneaked up from behind with its blend of horror, humour, nuanced characters and paranoid drama and became the most popular drama that Fox ever had. Look out beyond Fox and you can see The X Files premiered alongside other SF dramas like Star Trek: Deep Space Nine, Time Trax, Babylon 5, SeaQuest DSV and Lois and Clark. The X Files really doesn't belong on that list: instead it belongs on another list, sitting alongside other police-based dramas premiering in 1993 such as NYPD Blue and Homicide: Life on the Street. Shows like Deep Space Nine and Babylon 5 were science fiction first and dramas second. With The X Files it often felt like it was the other way around.

Even as a self-contained story , the X Files pilot is a stunning piece of work. It manages to introduce both lead characters, establish the tone and content of the series perfectly and still manage to provide an entertaining and self-contained story of alien abduction and unsolved murder. It blends elements of horror with a smart line of humour. It's got a pair of stunning lead actors who share an immediate chemistry.

On a personal level, I remember reading about the series in a local newspaper and subsequently deciding to give it a watch. The concept seemed cool and at that time I was pretty much watching any science fiction TV that was available. I liked what I saw - in fact, I liked it a lot. Then, about halfway through, while Mulder slams the brakes on his car, leaps outside and goes laughing maniacally into the rain, shouting "Wooo!! We lost nine minutes!", this series gained a fan for life.

Some shows start slowly, hesitantly even, and eventually build themselves to greatness. Other shows are groundbreaking classics from the get-go. The X Files was the second kind of series.
Posted by Grant at 9:07 AM