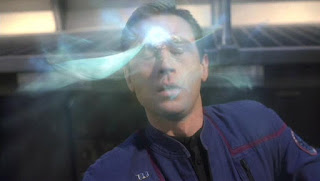 The Enterprise is overtaken at warp speed and captured inside a massive alien spacecraft. There they encounter a mysterious species of non-corporeal life forms capable of temporarily possessing human bodies, while the human consciousness detaches and experiences a paradisaical life beyond their own physical form. Commander Tucker wants everybody on the ship to try the experience - but Captain Archer suspects that all is not as it seems.

And, of course, all is not as it seems, which means I suppose that things are as they seem since we'd never expect the aliens to be entirely benevolent - otherwise it would make for a pretty boring episode. Instead this is a tightly written, tense little thriller as the Enterprise is gradually taken over by an alien intelligence and there doesn't seem to be a thing Archer can do about it.

I really liked this episode. It's self-contained and packed with action and suspense, making it a sort of "mini-movie". It gives each member of the regular cast at least one key scene or plot thread, and spreads the plot among them rather well. It also doesn't give each character the storyline you might expect: Phlox, for example, gets his first action scene. He gets his second as well.

What I particularly enjoyed was the strong sense halfway through that there was nothing the crew could do to escape their situation. Obviously I never doubted that they would find a way out, but nothing seemed immediately apparent, and David Livingston's excellent direction ensured that I felt about as frantic and terrified as the characters did.

Basically this is Star Trek doing what it does best. There's some action and adventure. There's a cool science fiction idea. There are appealing characters with a strong sense of camaraderie. There's no other franchise that does this sort of thing as well, so it's always a pleasure to see Enterprise get it so right. This makes 11 good episodes out of 18, and gives Season 2 a current watchability score of 61%.
Posted by Grant at 9:27 AM