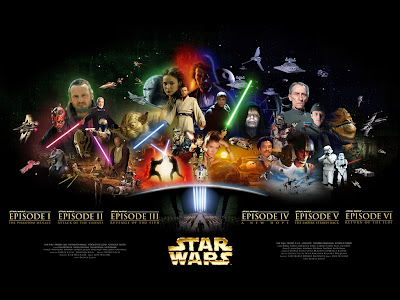 So this morning the geek Internet has woken to the news that Walt Disney has purchased Lucasfilm Ltd, including the rights to Star Wars, for approximately four billion dollars in cash and stock. This has naturally created an enormous amount of interest, speculation and way, way too many not-that-funny jokes on Twitter. A lot of people - myself included - are wondering what this may mean, so I figured it was worth putting down some details and speculating on what this means: for Disney, for Star Wars and for American cinema in the decade to come.

So what has Disney precisely purchased?
Disney will purchase Lucasfilm Ltd for US$4.05 billion. Half of that is in cash, while the other half is in issuing approximately 40 million shares based on the company’s October 26 stock price. Disney intends to repurchase all 40 million shares by 2014.

$4.05 billion buys all rights to Lucasfilm's productions, including Star Wars and Indiana Jones, and presumably less high-profile productions such as Willow, THX-1138 and The Radioland Murders. Disney will also wholly own Skywalker Sound, videogame developer LucasArts and visual effects house Industrial Light and Magic. Pre-existing distribution and merchandising contracts will of course remain in place, but may shift hands when the time comes to re-negotiate them. Dark Horse Comics has already confirmed they will continue publishing Star Wars comics for the time being.

How does this compare with other recent IP purchases by Disney?
Disney has been making a habit of massively expensive IP purchases over the past decade: Lucasfilm is essentially their fourth, following purchases of Pixar Animation Studios, Marvel Comics and the Muppet Studios.

In 2006 Walt Disney purchased Pixar Animation Studios for $7.9b. While this is double what they're paying for Lucasfilm, in that case it was entire a stock purchase and did not involve any cash (the Lucasfilm payment involves directly paying George Lucas two billion). At the time of the Pixar purchase, Pixar's films had grossed approximately $3.8 billion worldwide (compared to about $4b for Star Wars). Crucially, however, the Pixar purchase brought with it that company's key talent: notably John Lassetter and Steve Jobs. The Lucasfilm purchase does not bring with it George Lucas, aside from his acting as creative consultant on the new Star Wars trilogy.

In 2009 Disney purchased Marvel Comics for approximately $4 billion. This was essentially a direct IP purchase: Disney bought the rights to use many of Marvel's characters in feature film productions. Again it didn't really involve the acquisition of specific talent like Lassetter, and it also did not include rights to certain characters that were already under pre-existing license arrangements (Spider-Man with Sony, for example).

What do we know about Star Wars Episode VII?
Star Wars Episode VII has been tentatively scheduled by Walt Disney for some time in 2015. Tradition dictates the film would be released in May, but that would conflict with Disney's planned Avengers sequel. It's most likely one of these films will be released worldwide in May, and the other in July.

The new film is the first in a planned trilogy. Lucasfilm has already provided a treatment of all three films (treatments are detailed storylines, essentially), and that treatment (presumably written by George Lucas) forms the core of Disney's purchase. It is planned for the new films to be released once every 2-3 years.

The only announcements regarding cast and crew are that George Lucas will act as Creative Consultant, while new Lucasfilm chair Kathleen Kennedy (who co-founded Amblin with Steven Spielberg) will act as Executive Producer.

Are Luke, Han and Leia coming back?
No casting announcements have been made, but based on past comments by him it's likely that Mark Hamill will be agreeable to returning as Luke Skywalker. Carrie Fisher and Harrison Ford strike me as long shots, but that is entirely speculation on my part.

(Edit, 1/11): Mark Hamill has confirmed that he and Carrie Fisher had lunch with Lucas, where they were informed of his intention to make Episodes 7-9, but not whether or not he and Fisher are to appear in those films.

Will the new films follow the books?
Short answer: no one knows right now. Longer answer: common sense strongly suggests that any new Star Wars film will freely chart its own course, and not be bound by the continuity of the spin-off novels. This is understandable: millions of people have seen the Star Wars films, while thousands have read the books. Anyone seriously demanding that the films respect the continuity of the books is being hopelessly naive.

What about Indiana Jones?
The rights to Indiana Jones are a little complicated, because Paramount continues to have distribution rights to that franchise. The most likely result will be akin to the films Iron Man 2 and Thor, which Walt Disney produced and owns, but which were distributed by Paramount under its pre-existing contract with Marvel Studios. So in theory an Indiana Jones sequel or reboot could now be freely made by Walt Disney, but Paramount would retain the right to distribute it in cinemas and other media in return for a distribution fee.

Indiana Jones fans shouldn't waste too much time thinking about this, however, as in the words of Disney head Bob Iger 'We didn’t ascribe any value to the Indiana Jones franchise. It doesn’t factor into the equation with this acquisition.' In essence: yes Walt Disney now owns the rights to Indiana Jones; no Walt Disney doesn't care.

What about Willow?
No one's mentioning Willow (surprise, surprise), but Walt Disney in theory does now own the property part and parcel. My prediction: give this one a few months for someone within the company to notice, and sooner or later we might see a potential TV series spin-off or somesuch.

What about The Clone Wars cartoon?
Lucasfilm's pre-existing agreement with the Cartoon Network (a Warner Bros subsidiary) continues for the time being. To be honest I don't expect this series to continue much beyond one or two seasons anyway. There's only so much war those clones can fight.

What about potentially new TV shows?
It is as good as guaranteed that some form of Star Wars cartoon will be made and broadcast on Disney's own Disney XD childrens channel. It's also reasonable to assume that such a cartoon will be based on the sequel trilogy and its characters.

Given that Disney is exploiting its Marvel characters via a new live-action TV series on ABC (SHIELD), it's possible - though by no means guaranteed - that a Star Wars live-action drama could join it at some point in the future. We know that Lucasfilm has been developing a live-action series for some years - this might be its chance to finally get produced.

Why is George Lucas doing this?
In short? He's retiring. Lucas turns 69 next May, and his children are not actively involved or interested in film production. His transition out of Lucasfilm has been taking place over the past few years and he had already announced Kathleen Kennedy as his successor. Kennedy will now oversee Lucasfilm for Disney.
Posted by Grant at 9:49 AM