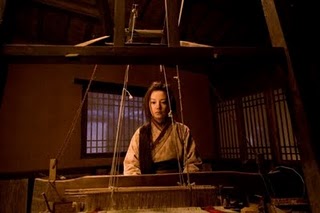 The legend of Hua Mulan, which is a significant one within Chinese pop culture, is almost certainly best known to English-language audiences in the form of the 1998 Walt Disney animated feature film (just run a Google image search on the word "mulan", for example). It's perhaps refreshing then to find a new, Chinese-language take on the story in Jingle Ma's 2009 live-action feature Mulan.

This is the sixth motion picture to be based on the story of Hua Mulan, although previous attempts have included not just Disney's animated effort but also silent films and motion picture operas. This is Hua Mulan as seen through the lens of Chinese sword-fighting epics, and the result is visually attractive, emotionally stirring but also a little bit by-the-numbers. It's my arch-nemesis when it comes to reviewing films - an average one.
The cast is generally very good, particularly Zhao Wei as Hua Mulan, but also Jaycee Chan as childhood friend Xiaohu and Hu Jun as the villainous Mendu - son of a regional clan leader. Jaycee Chan is coming in leaps and bounds as an actor - I first saw him in The Empress and the Rose and was unimpressed, while by Invisible Target he seemed much improved. He's at his best here.

The film looks great, while adhering the standard conventions of the genre. One image particular stands out - dozens of wooden dog tags tied on a line - and it's repeated a few times during the film to great effect.

What ultimately drags Mulan down is the story - quite simply it feels like too many other Chinese historical epics we've seen before. Despite the acting talent on display, the great costumes and the attractive visuals, there's a sort of reheated vibe to the piece as a whole. The romantic cliches are markedly different to the ones Western audiences are used to, but they're still well-worn and getting a little bit tedious.

For the casual viewer uninitiated to Chinese epics, Mulan may easily impress. To more seasoned and experienced viewers, it seems bound to disappoint a little.﻿

This review originally appeared at Eiga: Asian Cinema.
Posted by Grant at 11:58 AM