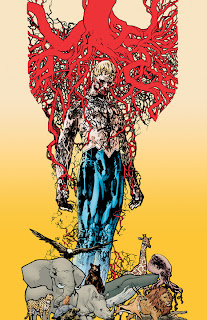 Under Jeff Lemire and Steve Pugh's watch, Animal Man has been one of the most widely acclaimed titles of the New 52, not only gathering strong critical love but also selling exceptionally well as a trade paperback.

It's part of a broader incorporation of classic DC Vertigo characters back into the DC Universe. Swamp Thing received a relaunch at the same time, while Justice League Dark has incorporated John Constantine and Tim Hunter (of Hellblazer and The Books of Magic fame). It could have been disastrous, and in fact I was expecting it would be disastrous, but some fantastic writing and sharp artwork have made these books among the better titles of the New 52. 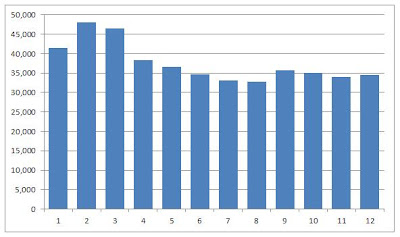 Sales-wise, this book is a picture perfect dream for DC. After a peak above 45,000 copies for issues #2 and #3, the book has settled down to a very comfortable average around the 35,000 copy mark. It doesn't appear to be following the same gradual decline experienced by other books, indicating that it's found its audience and they're a pretty loyal bunch. Coupled with strong collected edition sales, and I think it's safe to say Animal Man is one of the New 52's breakout successes. Issue #12 sold approximately 34,500 copies. That's only a 17% decline over an entire year. Other titles fell three times that by the third issue.

It's pretty clear that Animal Man is a long-term proposition for DC. The only question is whether or not the title will sink if (OK, when) Lemire decides to leave it.
Posted by Grant at 5:10 PM