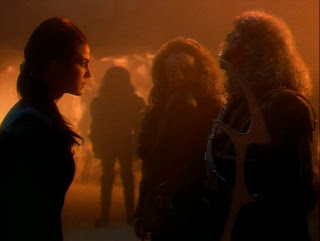 Three old Klingon masters converge on Deep Space Nine with a message for Dax: their arch-enemy has been found, and they are preparing to challenge him to settle a decades-old feud. But the Dax who swore a blood oath with them has died, and Jadzia isn't sure whether or not she should - or can - join them on their quest.

This episode is essentially 42 minutes of Star Trek fan pornography, on a level not seen since Star Trek: The Next Generation's "Relics" (the one where Mr Scott arrives in the 24th century). If you're not an ardent fan of the original Star Trek, then these three Klingon veterans could be anyone. If you are an original series fan, then you immediately know that Kang, Koloth and Kor are the three Klingon captains who faced off against Captain Kirk and the Enterprise.
Significantly, however, Kirk doesn't score a mention. If you don't know the backstory of the characters it makes no difference to how the story unfolds at all. This separates this episode from other fan-pleasing episodes I've seen in other SF dramas (take for example Doctor Who's "Attack of the Cybermen", a story essentially incomprehensible to people who didn't know the storylines of episodes 20 years earlier). This episode is a textbook example on how you should make a fan-pleaser: the continuity porn is there for those who recognise it, but it never interferes with the story being told.

If the last episode ("Profit and Loss") was Star Trek meets Casablanca, then this episode is surely Star Trek meets The Wild Bunch. An old gang of warriors, reunited for one final score - and with similar results. I applaud this episode for not pulling its punches. It's written by Peter Allan Fields, a writer whose name in the credits appears to guarantee quality: he wrote "The Inner Light" for The Next Generation, and his Deep Space Nine episodes include "Duet", "Necessary Evil" and "In the Pale Moonlight".

It's essentially an episode of two halves: the first is a character drama, with Dax struggling with her desire - and simultaneous reluctance - to join Kor, Koloth and Kang in their quest. Her conversation in Ops with Major Kira about what it feels like to kill someone is beautifully and sensitively portrayed. It made me realise that Deep Space Nine really doesn't use Kira enough. Other scenes all give the regular cast depth and nuance: Sisko's confrontation with Dax, Odo's unexpectedly sincere apology for insulting Kor, and so on.

The second half is the attack on the villain's secret lair, and while it lacks the depth and subtlety of the first half it still manages to give the episode a rousing finale. Dax's reluctant re-entry into Ops at the end of the episode, playing out with no dialogue and a series of knowing glances, is the cherry on the top. This is an exceptional episode of Star Trek, and a real treat for the die-hard fan. We've hit 13 good episodes out of 19, or 68%.
Posted by Grant at 9:08 AM