It's Cold Outside #2: "Fathers and Suns" 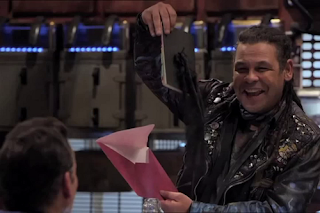 It's Father's Day, which leads Lister - who due to a time travel incident is his own father - to realise that he's a disappointment as a son and a failure as a father. Rimmer and Kryten install a new shipboard computer to replace the now-departed Holly.

If the premiere left any doubt that Red Dwarf has improved considerably with this new season, this second episode completely erases that doubt. I compared "Trojan" to Red Dwarf around its fifth or sixth season. "Fathers and Suns" is for the most part much more akin to the series back in its third season. The characterisation is razor-sharp, the gags are mostly based on character rather than situations, and the overall vibe is much more akin to the likes of "Balance of Power" or "Marooned" than, say, "Gunmen of the Apocalypse" or "Back to Reality". I'm slightly shocked to admit it, but this is the first Red Dwarf episode in quite a while to be genuinely good.

The core of the episode's appeal is Lister's attempts to get himself blind drunk, record messages as a father and then replaying them once he's hung over and can't remember what he recorded. It's strong, hilarious stuff that's crucially based on character, and feels exactly like the Red Dwarf I fell in love with in the first place.

The second plotline, in which Rimmer and Kryten install new computer Pree, is less successful. I think that's for a couple of reasons. The first one is that it feels like a retread of Season 2's "Queeg", only nowhere near as funny. Secondly, it brings into sharp relief that Holly isn't there any more. Back in the series' glory days, Holly (played by Norman Lovett) was one of Red Dwarf's best assets. Given a choice between this storyline and more Norman Lovett (or Hattie Hayridge, who was criminally underrated when she played the part for three seasons), I'll take Holly ever time.

The episode's conclusion feels a bit messy and isn't half as funny as the rest of the episode before it. Thankfully this doesn't spoil the episode too much. It really is the funniest episode the series has produced in ages, and hopefully Season 10 is going to continue improving like this. Two good(ish) episodes in a row - this I did not expect.
Posted by Grant at 9:20 AM