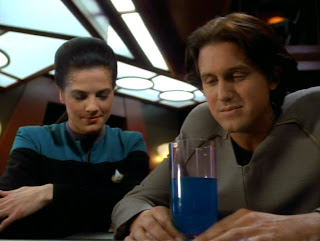 Lieutenant Dax has been assigned by the Trill government to assess Arjin, a young Trill who has submitted himself for joining to a symbiont. While she wrestles with the issue of Arjin's suitability - and her own resentment at how Curzon Dax treated her own assessment - she faces a bigger problem. An entirely new universe is forming in the station science lab, and it's growing very quickly.

I really enjoyed this episode because it provided a little more background to the Trill, a species who act as hosts to a symbiotic sort of slug/horseshoe crab hybrid that lives for centuries and passes on wisdom from one host to another. We've already gained an understanding of the importance and the risks of being selected as a host in "Invasive Procedures", but now we get a broader look at how a host goes about being officially selected. The episode also adds a new wrinkle to Jadzia's relationship with Dax's previous host Curzon.


Tied into this main storyline is some half-decent science fiction, with a Runabout crashing into a mini-universe as it passes through the wormhole. This leads to both scientific and moral challenges - can they stop the universe from growing and destroying the entire station, and do they actually have the moral right to destroy it if they need to?

The only problem with this storyline is that it creates a bizarre disconnect with the episode's secondary storyline. In a narrative aimed at providing some comic relief, Chief O'Brien is attempting to rid the station of an infestation of Cardassian voles. There's a sharp contrasts between the message of the episode's A-plot (all life has a right to live) and its B-plot (all voles are vermin and deserve to be blown out into deep space). It doesn't feel like there's supposed to be an editorial comment in the script, but that's almost how it winds up

Keep an eye out for Gul Evek (Richard Poe) - he's one of the few Star Trek characters to appear in three separate series within the franchise (in this case DS9, The Next Generation and Voyager). Also note Dax's considerable experience with Klingon culture - this gets explained in a few episodes' time.

This feels like a minor episode, but despite the disconnect between story messages I liked it a lot. We're up to 11 good episodes out of 17, or 65%.
Posted by Grant at 9:48 AM