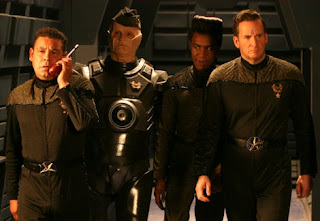 Way back when it started I was an enormous fan of Red Dwarf. It was a ridiculously cheap BBC2 sitcom set on a spaceship with a small cast. It was low on production values and used the science fiction as a backdrop for some classic character-based comedy. I watched both seasons and raved about it to my largely uninformed friends, for whom the series has come and gone without crossing their pop culture radar.

Some years later I was amazed to discover the series lasted beyond two seasons, and watched as Red Dwarf went from strength to strength, gaining mass popularity as it went. Sadly, the longer the series went on the less I enjoyed it. The science fiction stopped being a background for the comedy and started becoming a source for it. Smart dialogue got replaced by more visual gags. The characterisation went south: by introducing the android Kryten the series rendered another character (the ship computer Holly) utterly redundant, while the three regular characters Lister, Rimmer and Cat slid into stereotypes and stock running jokes. The nadir seemed to hit around the sixth season: the two subsequent seasons shook things up by introducing Chloe Annett as new regular Kochanski, but the series was still a long way from the quality of those first 12 episodes.

Despite the eighth season scoring record-breaking ratings, with more than eight million British viewers tuned in, the BBC turned down its option on Season 9. At the time I applauded their good sense: as a public-funded broadcaster they were free not simply to chase ratings but to chase quality as well. After eight seasons in about 12 years, Red Dwarf felt old, tired and formulaic. It seemed a mercy killing, quite frankly.

Then three years ago the subscription-based channel Dave commissioned a three-episode ninth season, Back to Earth, that scored them strong ratings and stimulated interest in continuing the series. Well it stimulated interest for some people. For me, it was the worst three episodes of Red Dwarf ever made. Bottom line is that the episodes weren't remotely funny, and were actually somewhat painful to sit through - like watching an old rock band's reunion tour where the enthusiasm was gone and they'd clearly forgotten what qualities had made them legends in the first place. The news that Dave was going to broadcast a six-episode 10th season in late 2012 filled me with dread. There was nothing left to flog except the empty bit of dirt where the horse's skeleton used to be. Like a masochist, however, or a fan who simply can't bear to fully let it go, I found myself watching the 10th season premiere.

This is the part of a review where it would be a lot easier for me to be able to say "and wow, the Red Dwarf I loved is back!" or "it's even worse than Back to Earth!". Sadly writer/producer Doug Naylor won't make it that easy for me. The truth is that "Trojan" is frustrating uneven, in turns providing moments of laugh-out-loud comedy as well as cringeworthy and overly telegraphed failed jokes. Is it a step up from Back to Earth? Oh thank goodness, yes. Is it anywhere close to what I feel were the glory days of the series? Not by a long-shot. Instead this is Red Dwarf somewhere around its fifth season: the characters aren't using running jokes and gags as much, they feel a little more believable and less caricatured, and the humour seems more based around the characters and their relationships that purely on wacky science fiction concepts. It's not perfect, and it's not 100% enjoyable, but it's certainly a massive step back up in quality.

A few things popped out as particularly enjoyable: firstly, the character actually seem to be acting their age. Lister (Craig Charles) in particular looks, sounds and feels like a middle-aged man. It's a relief that they're acknowledging how much time has passed: we've reached a stage, after all, where Red Dwarf is one of the oldest sitcoms of all time still in production. What on Earth has lasted longer? Probably Last of the Summer Wine (37 years from 1973 to 2010), and that's it. If any Red Dwarf is produced later than 2014, it will become the longest-running science fiction series of all time, supplanting the original Doctor Who's 26 years. This series is now visibly old, and I'm happy they're not ignoring it.

I was also deeply impressed with the Cat (Danny John Jules). He was a series highlight at first, but as the series went on the scripts stopped treating him like a humanoid cat and started treating him as a vain fashion-plate. It's nice to have the original version of the character back - it's been far too long without him.

"Trojan" isn't a classic episode of Red Dwarf, but it does supply quite a lot of laughs and does feel like the series is edging back towards form. If you've watched the entire series up to this point, you probably don't need a recommendation one way or another. If you've watched the series in the past but have drifted away, it's probably worth a look. Thumbs up from me - hopefully we'll see a continuing improvement over the next five weeks.
Posted by Grant at 1:42 PM