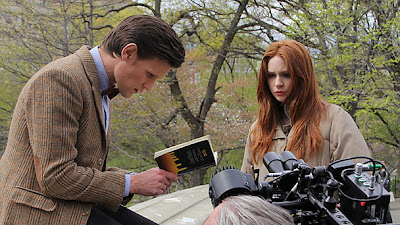 The Doctor, Amy and Rory are in New York, but in different decades. Using a pulp detective novel to guide them, the Doctor and Amy travel to Rory's rescue, finding a crime boss with an unusual collection, Professor River Song and the Weeping Angels. The Doctor and Amy come armed with foreknowledge, and rapidly discover that a little too much foreknowledge can be a very dangerous thing indeed - and this time the Ponds may not survive.

A continuing problem that has plagued Doctor Who since its return in 2005 is a lack of time. Put simply, there's not enough room in a 42-45 minute episode to introduce a new setting and guest characters every week, tell a three-act narrative and leave room for depth and characterization among the regular cast. Generally, its the narrative that has lost out and that's certainly the case here. While there is a plot, it's a relatively truncated one, and would have benefited enormously even from an extra 10 minutes to let it breathe and have the ideas play out. In a perfect world it would have been a two-parter, and I certainly could have survived without "A Town Called Mercy" or "The Power of Three" to get it.

I say this because the ideas at work here are brilliant. The Weeping Angels are operating a battery farm of time-displaced New Yorkers, which is the sort of bonkers genius idea Steven Moffat does so well. The episode restores the Angels to the creepy threat they were in their first appearance ("Blink"), rather than the neck-snapping murderous monsters they were the second time around ("The Time of Angels"). The Angel babies are a particularly entertaining addition: after all Moffat knows from his first Doctor Who script ("The Empty Child") that children make the best monsters. Had you asked me after "The Time of Angels", I would have said the Weeping Angels were an enemy best left alone before, in Borg-fashion, they become too watered-out and tedious to bother with. After seeing "The Angels Take Manhattan", I've surprised myself with my enthusiasm of seeing them again some time down the line.


Another nice addition to the episode is the spoiler-filled detective novel, written by River Song (although not yet, from her perspective) and read by the Doctor and Amy. It plays up the whole concept of fixing the future once you learn it, which is one of the core concepts underlying the episode. It also allows for moments that manage to be funny and horrible, like finding out what has to be broken to fulfil one of the spoilers Amy has inadvertently read.

Of course the main thing that this episode will be remembered for is the departure of Amy and Rory from the series. I think it was the finest character exit the series has ever done: well-prepared, properly developed, and simultaneously happy and sad. Karen Gillan, Arthur Darvill and Matt Smith all act their socks off, delivering the best performances they've given since all three joined the show back in April 2010. Trust Moffat to find a way to kill off two characters while keeping them alive, and to separate them from the Doctor in a fashion that didn't feel forced or unbelievable.

Matt Smith's performance in this episode is exemplary, as the Doctor realises that this is the last adventure he will ever share with Amy and that there's nothing he can do about it. He shares some wonderful moments not only with Amy but also River Song. I'm really enjoying the idea of a Doctor with a wife, and hope it continues for at least a few more years.

All up "The Angels in Manhattan" is an immensely entertaining and emotional swansong for the Ponds, and a lovely mini-season finale. Christmas can't come soon enough. Five good episodes of Doctor Who in a row: goodness me.
Posted by Grant at 11:56 AM