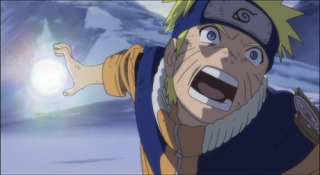 After seeing the latest fantasy film starring actress Yukie Fujikaze, ninjas-in-training Naruto, Sakura and Sasuke are shocked to see the film’s real-life heroine galloping towards them on a horse. The chase leads them to their latest mission: to protect Fujikaze and prevent her from fleeing the shoot of her next fantasy picture. Why is Fujikaze so desperate to avoid shooting in the distant Land of Snow? What is her manager’s secret, and why are a trio of magically armoured ninja trying to kidnap her?

Naruto is one of the most popular manga and anime properties in the world. Created by Masashi Kitamoto, it follows the adventures of the orange tracksuit-wearing ninja Naruto as he strives to improve his skills and become the most talented ninja in his village. The manga, which has become a multi-volume bestseller, inspired an equally popular anime TV series. That in turn led to a series of feature films, beginning with this first effort from 2004.

Ninja Clash in the Land of Snow provides its audience with precisely what it might respect: it follows the tone and aesthetic of the Naruto anime and simply increases the scale and budget of the presented story. In that respect then, any recommendation is predicated on what the viewer thinks of Naruto in the first place. It’s certainly possible to watch without foreknowledge of the anime series or the original manga, although obviously it will appeal more to existing Naruto fans.

The film is crisply animated, and has a nice sense of colour to it. Some of the action sequences get a little bit messy, however, with a few too many rapid-cut close-ups and not enough mid-to-long shots to give the fights a sense of space. Its director is Tensai Okamura, a career animator (Ninja Scroll, Ghost in the Shell, End of Evangelion) who previously directed the “Stink Bomb” section of Katsuhiro Otomo’s portmanteau anime Memories.

The story is relatively predictable, but is presented in a clear and emotionally effective way. The climax and conclusion may be obviously foreshadowed throughout the film, but it’s a testament to the film’s script, direction and voice acting that the end still satisfies when it comes.

The film contains some moderate violence that’s probably not suitable for younger children, but overall it’s a harmless piece of action-packed entertainment: not a classic, nor unwatchable. When lined up against the best anime Japan has to offer, it cannot compete. As a bit of entertaining fluff on a lazy Sunday afternoon? This b-grade actioner might just hit the spot.
Posted by Grant at 2:40 PM