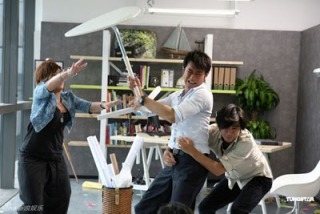 While Johnnie To remains relatively obscure to English-speaking audiences, even among fans of Hong Kong cinema only half of his career receives the attention it deserves. He is already well known for his Triad-based thrillers and action films, but in parallel to that he has maintained a long, rich career in writing and directing romantic comedies. Don't Go Breaking My Heart is his first romantic film since 2008's drama Linger, and it comes as a refreshing surprise.

Cheng Zixin (Gao Yuanyuan) is a financier from mainland China who successfully predicts the 2008 financial crisis, despite her warnings going unheeded by her current employer. Immediately before the crisis devastates Hong Kong's financial sector, she meets two very different romantic suitors. Cheung Shen-ran (Louis Koo) is a charismatic financial genius who works in the office building directly across from Zixin's window. Through the use of magic tricks, post-it note artwork and hand-written cards he attempts to woo her from across the street. At the same time Zixin meets Fang Qihong (Daniel Wu), a talented architect turned shambolic alcoholic. When Zixin returns to Hong Kong in 2011, she stumbles upon both men all over again - but which one will capture her heart?

The storyline doesn't win many points for originality, but despite this Don't Go Breaking My Heart is a wonderfully entertaining film. To co-directs the film with regular collaborator Wai Ka-fai, and together they bring the visual flair and slightly off-kilter tone of their non-romantic films to the genre. It makes for a stimulating mix, lifting a relatively by-the-number melodramatic plot and successfully creating something new with it. Wai Ka-fai is a gifted screenwriter, and brings an enormous amount of character and depth to the script. He even makes his audience care deeply about a frog.

Louis Koo is perfectly cast as the charismatic but unfaithful Shen-ran, while Daniel Wu does a very effective job with a character who changes considerably from his first scene to his last. Between them Gao Xuanxuan plays Zixin's inner conflict exceptionally well - it's a testament to her performance and the film's script and direction that Zixin's final romantic choice isn't entirely obvious until the film's climax.

All things considered, Don't Go Breaking My Heart will probably be remembered as one of To and Wai's lesser works, but it remains an highly entertaining and engaging experience. If you're in the mood for romance, you could certainly do a lot worse.
Posted by Grant at 1:38 PM