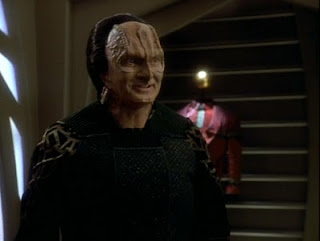 A Cardassian teacher named Natima arrives on the station, on the run for aiding the resistance against the military command. Her arrival rekindles flames of romance between her and Quark, while the Cardassians send one of their agents to capture her. Do you remember this episode? You must do. You must remember this...

Okay so it's Casablanca, serial numbers freshly shaved off and staged on Deep Space Nine. Quark replaces Humphrey Bogart, Cardassian teacher Natima replaces Ingrid Bergman and the enigmatic tailor Garak takes up the Claude Rains bit. It's not the best pulp sci-fi remake of Casablanca ever made - surely that has to be Barb Wire - but it's done with its tongue pushed far enough into its cheek for the production team to get away with it.

Natima is played by Mary Crosby, whom some might recognise as Kristin Shephard in Dallas (the one who did shoot J.R.). Personally, I like to remember her as Princess Karina in the criminally underrated sci-fi comedy The Ice Pirates. She and Armin Shimerman do something outstanding here: they manage to generate chemistry, humour and romance through half a metric tonne of latex and prosthetics. It's an admirable feat, and one that is largely responsible for lifting the episode to the enjoyable level it reaches.

We also finally get a payoff in the "is he/isn't he" debate over the Cardassian tailor Garak (Andrew Robinson). The answer is not, as some might suspect, "yes, he is a secret agent for the Cardassian Union", but rather "yes, he was". An eagerness to get back into his paymaster's good graces leads Garak to inform on Natima, and personally take the mission to execute her before she leaves the station. This is the side of Garak that's been missing until now: he's amusing in a slightly insincere, slimy sort of way, but from hereon in it's coupled with the knowledge that underneath the evasive exterior lies a driven, ruthless espionage operative. He doesn't flinch at murder, and he's not necessarily anyone's friend.

Story arc follows should keep an eye out for the first mention of a resistance group within the Cardassian Union: the series will pick this thread up down the line and run with it.

This is one of those cases of an eye-rolling idea ("It's Casablanca! In space!") and making something good out of it through solid dialogue and great acting. It gets the tick of approval, bringing Season 2 up to 12 good episodes out of 18, or 67%.
Posted by Grant at 3:44 PM