Babble On #28: "The Geometry of Shadows" 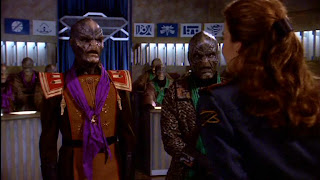 Ivanova receives a promotion to Commander, and is immediately dispatched to resolve a civil dispute among the reptilian Drazi. Meanwhile Ambassador Mollari entertains the manipulative Lord Refa, who encourages him to join a coup d'etat against Centauri's ageing and ineffective Emperor. The mysterious technomages, who use science to simulate magic, are gathering on the station before departing - and no one knows where they're planning to go.

Londo Mollari is faced with another moral challenge this week, and fails once again - now not only is he in bed with the mysterious Shadows, he's now participating in a planned coup d'etat. It's a pretty effective character arc, given how much he was used for comic relief in Season 1. He's still being used for comic relief for a lot of this episode too, but there's a dark edge to things now.

The Technomages don't impress me. I'm still finding it deeply unconvincing every time Babylon 5 tries to make the cross from science fiction to fantasy. The idea of "technomages", who seem to exploit Clarke's Third Law to the fullest extent possible, strikes me as farcical - or at the very least deeply silly. The characters live inside a science fictional universe: that they feel threatened or mystified by the technomages just doesn't gel with the Babylon 5 environment as a whole. I'm also pretty sure that infecting the computer systems of the Centauri embassy with a "cyberdemon" counts as an act of terrorism.

The B plot is a lot more entertaining, and for once is comedy that works: Ivanona gets promoted to Commander and is ordered to end hostilities between two fighting factions of Drazi. Every five years the Drazi are divided into green and purple teams who then fight mercilessly until one side wins and gets to rule for the next five years. It's arbitrary and silly, but also manages to draw some funny comparisons with how politics often works in the real world.

I'm still not quite sure how military ranks work within the Earth Alliance. In Season 1 Sinclair was a Commander, and that gave him sufficient authority to govern 250,000 people inside a diplomatic space station. Ivanova, as a Lieutenant, was able to serve as his second-in-command. Now in Season 2 we have a Captain in charge, and now that Ivanova has been promoted to Commander she... gets to continue serving as second-in-command. Sure, she'll be getting paid more now but shouldn't she be getting a commission of her own?

This episode is another mixture of good and bad elements. The Technomages are silly, but I do like Michael Ansara (who plays their leader). The Drazi plot is one of my favourites from my original watch of this series, and it still amuses. Overall I'm giving it the thumbs up. That's two good episodes out of three, or 66%.
Posted by Grant at 9:22 AM