I love the Sega Dreamcast 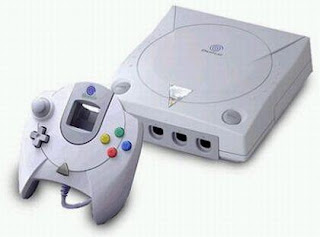 I'm a big videogaming fan, but of all the various home consoles released over the decades by a multitude of manufacturers I will always have the most affection for Sega's final console: the Dreamcast.

This affection is for a number of reasons. First of all, it was a console that unfairly died before its time. The Dreamcast's release was derailed by a series of strategic press releases and conferences by Sony, each one making successfully grandoise claims about the power of their upcoming Playstation 2 console. Jaw-dropping demonstration videos (which were faked) and hyperbolic descriptions of the PS2's hardware (what the hell is an "emotion engine"?) led many gamers to hold off on buying Sega's very real console in favour of Sony's then-unreleased competitor. Not only was this strategy by Sony both distasteful, it led a lot of gamers to overlook and underestimate the sheer quality of Sega's machine. The Dreamcast boasted great sound and graphics, in some cases visibly superior to anything Sony would go on to produce on the PS2.

More importantly, the release of the Dreamcast co-incided with an unparalleled burst of creativity and innovation within Sega. Take another popular console, the Nintendo SNES. Its most popular and best games are all sequels: Super Mario World, The Legend of Zelda: A Link to the Past, Super Metroid, Final Fantasy VI, and so on. Conversely, the Dreamcast's lineup of games was rich in new concepts and characters. It came up with numerous new wrinkles on gaming genres, many of which continue to be popular today. Developers of modern racing games owe a debt to Metropolis Street Racer, for example, just as rhythm action developers owe something to Rez and adventure/action developers owe something to Shenmue. Sure there were still plenty of sequels (notably two enjoyable Sonic the Hedgehog instalments) but the focus of the Dreamcast was the future. New ideas. New franchises.

The Dreamcast was released as part of a generation of hardware that included the Playstation 2, the Nintendo Gamecube and the Microsoft Xbox. It sold 10.6 million units, compared to Nintendo's 21.7 million, Microsoft's 24 million and Sony's 154 million. It sold the least, but it remains - hand on heart - the best console of the four.

Under the cut: my ten favourite Dreamcast games. 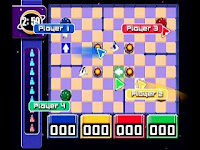 ChuChu Rocket
ChuChu Rocket is a wonderfully zany puzzle game in which the user lays directions for a stream of mice to navigate little mazes to reach an escape rocket while avoiding the hungry cats that lie in wait. It's a great game, mostly because it employs that wonderful strategy where solutions that seem impossible at first become blindingly obvious once you've worked out the solution.

Crazy Taxi
A port of the popular arcade game, Crazy Taxi succeeds through excess: you control a car that's a little too fast and a little too responsive, driving around a city that's a little too busy and with just a little bit too little time to achieve your goals. The result is something frantic, panicky and- well, something crazy. The sequel was also fantastic, the Xbox-exclusive third instalment not so much. 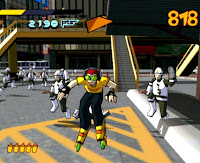 Jet Set Radio
Sega's rollerblading graffiti masterpiece, although to be fair it probably didn't have much competition. This game features some of the best cel-shaded graphics I've seen a videogame use, and it doesn't hurt the game is so playable as well. A sequel (Jet Set Radio Future) was an early title for Microsoft's Xbox - I have no idea why this franchise didn't go any further. It's wonderful.

Metropolis Street Racer
The Dreamcast's best racing game by a country mile.A mammoth 256 tracks to race on, layouts based on real-world city streets, a system that based the time of day in each city on what your Dreamcast's internal clock said the time was, and the widely acclaimed Kudos system. When the Dreamcast failed to last, Bizarre Creations took the lessons learned here and applied them to the more popular Project Gotham Racing on the Microsoft Xbox.

Power Stone
This is a great brawling fighter, one that takes advantage of a three-dimensional arena in a way I'm not sure videogames had previously achieved. Like all the best fighting games, Power Stone also boasted a range of inventive stages and charismatic playable characters. A sequel was pretty much just as good.

Rez
Designed and produced by the unparalleled Tetsuya Mizoguchi, Rez blends interactivity, visual graphics and music in a fashion never seen before. It's a surreal, Tron-inspired shooter, which also owes a considerable debt to Sega's popular Panzer Dragoon franchise. A HD edition released for the Xbox 360 is even better, but the game made its debut here. 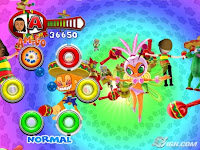 Sambo De Amigo
The rhythm action genre of videogame peaked in the West with Guitar Hero, but years beforehand Sega was leading the charge with this immensely enjoyable maracas simulator. You play a happy cartoon monkey. You shake a set of maraca controllers in time with the music. What's not to love?

Shenmue
Yu Suzuki's martial arts epic remains pretty much the most ambitious videogame project Sega ever made. At the time it was the most expensive game of all time. It's critically flawed, but at the same time it's utterly wonderful. Following the collapse of the Dreamcast, an Xbox port of Shenmue II failed to sell enough copies for Sega to risk concluding Suzuki's planned trilogy. Even though the story is unlikely to ever be concluded, Shenmue (and its sequel) remains an outstanding bit of videogaming history, and one of my all-time favourites.

SoulCalibur
A sequel to the immensely popular sword-fighting game Soul Blade (which appeared on the Playstation), SoulCalibur is, after all these years, still one of the best fighting console games of all time. It was smooth, instinctive, easy to pick up but difficult to master: pretty much the gold standard any game. It also boasted the best graphics of any videogame of its generation. No Playstation 2 game ever looked this good.

Space Channel 5
Tetsuya Mizoguchi strikes again, taking a concept for a simple rhythm action game and turning it into a bizarre pop art science fiction saga of alien invasions, minidress-wearing  TV news reporters and high-stakes dance-offs. The underlying mechanic is simple, the framing narrative and art direction is hilarious, and the game is simply a delight to play.
Posted by Grant at 11:51 AM