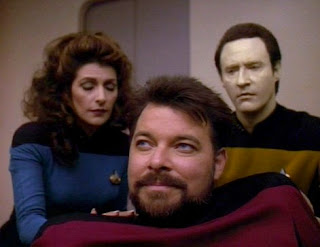 It is 18 October 1993, and time for another episode of Star Trek: The Next Generation.

Picard (Patrick Stewart) and Riker (Jonathan Frakes) are trapped on a pirate ship that is hunting down the parts of an ancient super-weapon. On the Enterprise, acting Captain Data (Brent Spiner) maintains his pursuit.

"Gambit" is a rare Star Trek two-parter in which the second half is generally of the same quality of the first. A lot of that comes down to ambition: storylines like "The Best of Both Worlds" or "Descent" set up huge expectations with their first parts, only to fail to deliver with the conclusion. "Gambit" is a story of relatively modest ambitions, but by matching them "Part 2" wraps up an unexpected fun and breezy space opera.

To a large extent the things that made "Part 1" enjoyable are the things that make "Part 2" enjoyable as well. It is great fun to see Picard and Riker work together to manipulate the pirate captain Baran (Richard Lynch), up to and including faking a murderous animosity towards one another. A staged raid on the Enterprise itself is a particular highlight.

Richard Lynch continues to be the standout among the guest cast, delivering a wonderfully rich and heightened performance as Baran. The transition of villain from Baran to Tallera (Robin Curtis) - actually a Vulcan terrorist named T'Paal - is perhaps a little less successful, but a lot of that comes from trying to pack a little too much into one episode. The revelation that there are violent successionists among Vulcan society is a fairly big deal, and the episode does not give the idea enough room to flourish before it has already hit its climax. That said, the super-weapon everybody has been chasing turns out to be quite a clever idea and ties in nicely with what we know of Vulcan history.

There is some great material in the middle of the episode between Data and Worf (Michael Dorn), with the latter expressing his frustration at the former's command decisions. Data takes Worf aside and gives him an unexpectedly hard-edged dressing-down. It is great to see how far Data has progressed in a command role (after his first attempt in "Redemption II") and it is particularly nice to see how professionally both characters act as a result of the exchange. It is great writing and supported by Spiner and Dorn's typically strong acting.

This is the second episode of the season to be particularly enjoyable, which is pretty worrying since we are already five episodes in. The quality ratio rises to 40 per cent, but for a series that has had six years to get things right that really is somewhat appalling.
Posted by Grant at 9:14 AM