Star Trek: The Next Generation: "Interface" 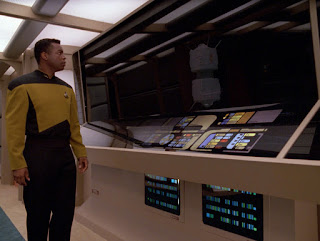 It is 4 October 1993, and time for another episode of Star Trek: The Next Generation.

While testing a new remote-controlled probe on a Starfleet vessel drifting inside the atmosphere of Marijne VII, La Forge (LeVar Burton) comes to believe that his mother - whose own starship has recently vanished without a trace - is trapped on the planet's surface.

By the time The Next Generation came around to its seventh and final season, viewers had been introduced to the family of almost the entire regular cast. They had seen Riker's father, Troi's mother, brothers for Data, Worf and Picard, a son and a late husband for Dr Crusher, and even a sister for the late Tasha Yar. The only character left with a proper back story or family was Geordi La Forge. That in mind, "Interface" was a pretty obvious episode to make.

There is the shadow of a pretty great episode here, as Geordi learns of the disappearance of the USS Hera and his mother - its captain - along with it. The uncertainty of whether or not she might still be alive, combined with the grief that comes with the high likelihood and she and her crew have died, is rich material for a television drama. We do get the odd glimpses of that potential episode, as Riker attempts to counsel La Forge and Data shares a conversation with him, but there is not enough of it.

Instead there is a weird storyline about a virtual reality suit that plugs directly into La Forge's VISOR apparatus, a starship trapped in the atmosphere of a hostile planet with all hands lost, and an alien species masquerading to La Forge as his mother and leading him to think the Hera has somehow crashed on Marijne VII - light-years away from where the Hera was last reported. The level of coincidence involved is ridiculous. It all distracts from the episode's best elements as well, and turns it into something rather generic and predictable.

The tight deadline on recovering the USS Raman (the ship that actually is at Marijne VII) also weirdly truncates La Forge's grief experience. Within literally hours of the Hera being reported missing, his friends are encouraging him to accept his mother's death and move on. Given how often the Enterprise itself has disappeared without trace to all corners of the galaxy - and beyond - it seems more than a little premature.

The titular interface is a very mid-1990s virtual reality kit that felt a little dated at the time of broadcast. It is also a complicated piece of equipment that is introduced in this episode and then never featured ever again. While it is nice to see LeVar Burton performing the virtual La Forge with his own eyes for once, that is just one nice touch inside a generally failed concept. Also overly familiar is the idea of non-corporeal aliens caught up by the Raman's descent, and which use the illusion of La Forge's mother than persuade him to help release them. It's a plot concept that has been featured a few too many times in The Next Generation and is feeling decidedly old-hat.

Season 7 is not off to a good start, with all three of the initial episodes failing to work to any reasonable satisfaction. The series is beginning to feel more than a little exhausted, as if perhaps Paramount cancelled it one year too late.
Posted by Grant at 6:49 PM