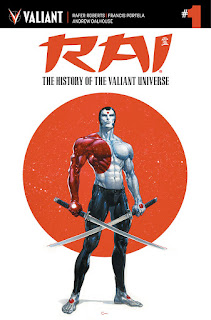 I keep recommending to comic book fans that I know that they should check out Valiant's range of superhero comics, since they consistently some of the most enjoyable stuff getting published these days. In particular I really enjoyed Rai, which was more of a far future science fiction story despite being set in the same fictional universe.

This month Valiant has launched the first of four one-shots, all titled The History of the Valiant Universe, and they're kicking things off with a return to Rai and his orbital home of New Japan. While it is well illustrated by Francis Portella, I am honestly not sure precisely who the market for this book is. It retells a highly truncated version of the Valiant Universe's history, but anybody who's read the storylines when they were first published will walk away a little bored and anybody who hasn't will simply be a bit confused - and likely also bored.

There are great ways into the Valiant titles - just buying volume 1 of one of the series in collected form would be enough - and this one-shot simply feels redundant. (2/5)

Under the cut: reviews of Copperhead, Detective Comics and Jem and the Holograms.

The hunt for the mayor's assassin hits its climax, thanks to the cooperation of the whole Copperhead team: Clara, Boo and Ishmael. This third story arc, which ends here, has been a little truncated and weak - particularly in comparison to the first two excellent storylines. There's still much to recommend here, it simply feels like a good book that could be a great one with a little more time and effort. Still it's an entertaining issue with some great action, and a set-up for a fourth arc beginning in a couple of months. (3/5)

The Order of St Dumas returns to threaten Gotham, which leads me to wonder if anyone is really that big a fan of Azrael. Like a lot of Batman fans I read the original Sword of Azrael miniseries some decades ago, and rather liked it. I was less keen on the Azrael-as-Batman run following Knightfall, and gave up on the Azrael ongoing series a few issues in. Now he's back and despite Tynion's typically solid writing on this series he just feels unnecessary and dull. A parallel storyline involving Bruce Wayne visiting the Penguin's nightclub to meet up with a valuable contact is a lot more interesting. (3/5)

Jem and the Holograms #26

It has been quite a while since I checked in with Kelly Thompson's excellent 21st century reboot of 1980s cartoon favourite Jem and the Holograms. This issue sees Kimber missing in Maui, and her bandmates desperately trying to track down where she's gone. It continues to be rather pleasant all-ages stuff, with likeable characters, a lot of angst and teen emotion, and really nice artwork - now by Gisele Lagace - which presents a nice range of body types and appearances. Books like this are valuable to have in the market; they're a great gateway to the medium for younger readers. This is the final issue of the current volume of Jem, but a Jem/Misfits crossover miniseries is just around the corner. (3/5)
Posted by Grant at 11:46 PM