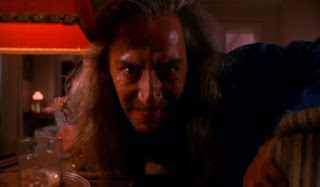 It is 6 October 1990 and time for the next episode of Twin Peaks Season 2.

So: one plot thread at a time. Donna heads out on Laura's old Meals on Wheels route. Her stop is to an old lady who fusses over being given creamed corn when she didn't want it. No problem: her tuxedo-wearing grandson teleports it across the room and into his hands. There is no explanation given for this, and Donna seems surprisingly calm about it. It is also the beginning of a worrying trend for Twin Peaks that will come to cripple this second season: weirdness for its own sake. In the first season, even when things got delightfully surreal, there was a sense that the supernatural elements were informed by something behind the narrative. This is the first episode where it really feels like things are getting made up for their own sake. It is not a development I like.

It is at Donna's next stop that she meets shut-in Harold Smith, who turns out to have shared a secret friendship with Laura before she died. Harold is creepy enough to make you want to run screaming out of the nearest door. There is something about Lenny Van Dohlen's intense staring that exaggerates his already unsettling demeanour and makes him look like someone that should be on some kind of police register. At any rate he represents yet another potential clue as to Laura's killer.

Cooper and Truman question Ronette, which is not a particularly helpful exchange as she is too traumatised to speak. There is a delightful business with getting stools to sit at the right height: the actors were having the trouble apparently, and Lynch simply left the footage in. It is this kind of strange small detail that I think I like the most about Twin Peaks. It gives it such a distinct pace and tone that is unlike other dramas of its time.

Later Cooper is visited by Major Garland Briggs (Don Davis) and given a message sent from outer space that reads "the owls are not what they seem". Here we are again, with weird things happening simply because they do. It is a bizarre experience watching the series begin sliding off the rails in such a profoundly sudden manner. Only two episodes ago things were going so well.

There is even a weird interminable song played by James (James Marshall) as part of the incredibly tedious James-Maddie-Donna love triangle storyline. It drags on for so long. In all truth it probably only lasts two minutes, but it feels like thirty. Later on Maddie has a stunningly frightening vision of the elusive Bob (Frank Silva) approaching her through the Palmer's living room. The scene is pure nightmare fuel from beginning to end.

Who knows what was going through the minds of the show runners when these second season episodes were made. It really does feel like they lost sight of what was making the series work so well, Network interference is an obvious answer: Season 1 was shot and completed before a single episode went to air, giving the executives no change to significantly interfere. We know that Frost and Lynch were forced to reveal Laura's killer - they never wanted to ever explain it - so maybe all of this pointless weird silliness was a network command as well. Whatever the reason, the series is taking a sudden nose-dive in quality.
Posted by Grant at 12:32 PM