Colditz: "Ace in the Hole" 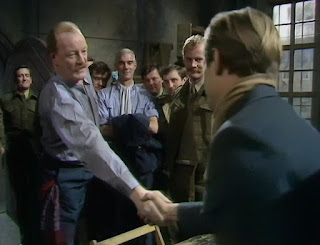 It is 11 February 1974, and time for another episode of Colditz.

Famed Squadron Leader Tony Shaw (Jeremy Kemp) is brought to Colditz. Carter (David McCallum) hopes that a high profile escape will raise the flagging morale of the British prisoners, only Shaw appears to have no intention of escaping and dedicates himself to researching English literature instead.

There is a problem with the format of a series like Colditz, or indeed any prison-based drama really, which is a lack of potential storylines. This is the sixth episode of the second season, and the third episode to base itself around a new inmate being transferred to the castle and interacting with the regular cast. On the one hand it's an easy way to create drama and intrigue, but at the same time it easily falls into a familiar and ultimately slightly dull routine. This episode is the first to really feel like part of that routine. It does not do anything specifically badly, but it does wear a little on the patience.

Jeremy Kemp guest stars as Tony Shaw, a highly decorated reconnaissance pilot and photographer. Carter wants him to escape. The German authorities are clearly concerned that he will try to escape. Shaw, much to everybody's surprise, simply wants to hide out in the prison library and write a book about English literature. It's a strong performance by Kemp, but unfortunately the script simply makes the viewer wait to see him reveal his secret escape plan - which he does, quite late in the day, in a relatively unsurprising fashion.

The episode's conclusion feels deeply unsatisfactory. While we may return to Shaw and his escape attempt in subsequent episodes, as a self-contained story there is no real sense of resolution or consequences. The prison librarian is incensed that he has been lied to and that his library is being used as cover for an escape attempt, but we do not see what happens with his anger. Shaw has done a remarkable turnabout in tone but we don't really get to see how others - fellow prisoners or German guards - react to that.

This is a generally underwhelming episode: entertaining to an extent, but in comparison to Colditz at its best it is rather unsatisfactory. The series is also beginning to feel a little repetitive: hopefully the back half of Season 2 will present some fresher storylines and ideas.
Posted by Grant at 5:27 PM