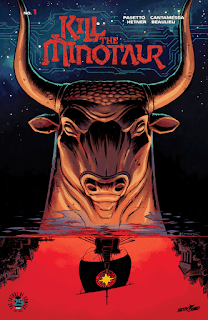 Kill the Minotaur is a new series out from Image that uses the comic book medium to retell the Greek myth of Theseus and the Minotaur. It is far from the first attempt to adapt the story to comics, but based on the first issue it seems a fairly promising attempt.

One big selling point is Chris Pasetto and Christian Cantamessa's script. It works pretty hard to actually give the various characters some depth and distinctive personalities. It makes them flawed human beings rather than iconic heroes and villains, and this is very much in the book's favour. They are not entirely original or fleshed-out - there is still a very heightened sense to them all - but it is a step in a good direction. Hopefully future issues will ease back just a little, since it has a tendency to be somewhat overwrought in key scenes. Lukas Ketner's artwork is lightly exaggerated, which emphasises the emotion of the script.

The Greek myths are rather dark, violent stories, and it is good to see that style retained for this adaptation. It even approaches a mild sort of horror from time to time, which feels appropriate. This is a slightly flawed but solid adaptation; I am keen to see where its creative team takes it. (4/5)

Under the cut: reviews of Action Comics, Hulk and Star Wars.

General Zod has been freed from Belle Reve Prison, adding another super-villain to the loose coalition of criminals working to defeat Superman once and for all. This is not the most inventive of storylines, but it does play a lot with a broad range of characters and that always brings a certain level of geeky enjoyment. Given how this issue develops it seems the cast may expand significantly with a lot of DC supporting characters apparently rushing to Superman's aid. This all feels a lot like Dan Jurgens' 1990s Superman comics writing, which is no bad thing. (3/5)

With the initial story arc complete, Hulk takes some time out to fully explore how Jennifer Walters is coping in the wake of her cousin Bruce Banner's death. It's a welcome shift down in gears, with a string of well-developed scenes and a much more upbeat and hopeful tone than I had expecting to see. It also finds time to set-up a new storyline as well, with a childish prank involving a new narcotic called 'Monster' going terribly wrong. Georges Duarte's artwork is quite different to Nico Leon's work on the first six issues, but suits the material rather well. (4/5)

"The Screaming Citadel" continues, as Luke falls prey to a space vampire, Han Solo gets mind-controlled, and the Wookiee bounty hunter Black Krrsantan becomes a rage-filled monster. This has been a surprisingly good crossover, combining the expected space opera tropes of the Star Wars universe with a strong vein of gothic horror. It is good to see Marvel experimenting a little with the license and trying out new angles: it turns out Star Wars and horror are actually a pretty good fit. (4/5)
Posted by Grant at 12:15 PM