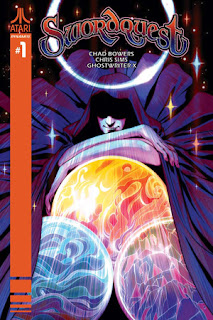 Some days it seems like every media property not properly getting nailed down is being picked up and adapted into a comic book. Cartoons, old TV shows, movie franchises, and even toy lines are getting tidied up and re-developed as comics. Some have been great; the majority have been pretty ordinary, and occasionally downright awful.

When independent publisher Dynamite announced they would be producing a range of comic books based on old 1980s Atari videogames, I was immediately fairly cynical. It is ostensibly a ridiculous idea, given how simple and slight those old games were. In effect it seems little more than a branding exercise, using a name like Yar's Revenge or Centipede to attract readers of a certain age to check out an otherwise unrelated book on the comic store shelf.

Sword Quest, then, comes as a complete surprise. Rather than adapt the game itself - a simple fantasy game released over three instalments between 1982 and 1984 - writers Chad Bowers and Chris Sims have instead taken inspiration from the real-life competition that accompanied the original games' release. Players who solved the console games could write in to Atari and get shortlisted for a Sword Quest championship, the winner of whom would receive a one-off genuinely expensive jewel encrusted artefact based on the games' in-universe lore. When the fourth game in the series was cancelled the grand prize - a jeweled sword - was never actually awarded. This new comic miniseries sees one man attempt to steal it.

It is another heist comic, coming hot on the heels of the likes of 4 Kids Walk Into a Bank  and Night Owl Society, and to an extent it shares much of the DNA of those books. The artwork, by the pseudonymous Ghostwriter X, reflects that to a large degree, and the writing has a very down-to-earth and grounded quality - until the final page, at any rate. Some times a comic can really surprise you: Sword Quest is definitely one of those comics. (4/5)

Scott Snyder continues his dual narrative between Batman in the present day and Alfred Pennyworth as a young man back in the past. The present-day sequences are basically Batman-as-Bond-movie, which is never a bad thing. The flashbacks illuminate Alfred's personality to a large degree, but there is something about it that feels a little too on the nose. His references to Bruce as his 'son' feel a bit too out of character, even as an internal monologue, and the return of Snyder's weird machine designed to keep Batman being revived again and again into the future (as introduced in Batman) makes a slightly unwelcome return. This issue's a mixture of good elements and somewhat misguided ones, although Alberqueque's artwork is certainly a big selling point. (3/5)

On his quest to gain his own red lightsaber, Darth Vader sets out to an old Jedi space station - running into a group of clone troopers on his way. Here's the thing: in a media tie-in like this, there is a good way to play with continuity and a bad way. The good way was typified by Kieron Gillen's original Darth Vader comic, which pulled in a lot of nice touches, but basically told a 25-part epic storyline about Vader rising in the Emperor's esteem between Star Wars and The Empire Strikes Back. This second volume, which continues to feel entirely unnecessary, is explaining how Vader got his red lightsaber. This is the bad kind of media tie-in. It answers a question nobody was asking, and removes a little bit of mystique from its title character as it does so. There is a nice subplot going on here between two clone troopers, and the artwork is solid, but overall this is an entirely unnecessary comic book. (3/5)

Dawn has returned home to find her sister has already given birth, and that her father has had a heart attack and died. This is a remarkably strong issue, using the whimsical cosmic setting of Silver Surfer to tell a rather touching story about grief and moving on. This is a fairly variable comic book, one that leans on the side of excellence but which occasionally throws out a fairly weak and superficial issue. This is absolutely not one of those. Michael Allred's artwork does a tremendous job with fairly tight stylistic confines. Dan Slott's script is gentle and well-developed, using a non-linear narrative to good effect. (4/5)

While Uhura teaches at the Vulcan Academy, Spock is assigned to help a dig for radioactive isotopes at New Vulcan's polar region. This is an enjoyable one-shot adventure, set in the aftermath of the film Star Trek Beyond, that provides some nice character development and insight into Uhura and Spock's relationship. Unlike Darth Vader, this feels like a good media tie-in. It enhances and explores, rather than simply explains a piece of back story. Tony Shasteen's artwork is mostly good, with a few unexpectedly shaky panels here and there. The relatively self-contained story is appreciated; not every comic book needs to tell an extended serialised narrative. (3/5)