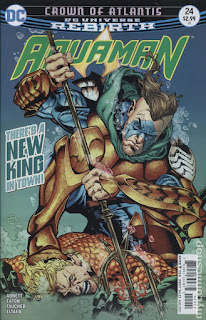 Atlantis declares Corum Rath as their new king, putting Arthur in serious trouble. With two successive wars with the surface world just ended, and relations still very strained, a war-monger for a king is pretty much the last thing the kingdom needs. Arthur could help - but his people have abandoned his leadership.

There is solid entertainment value in Aquaman #24, which brings some long-running Atlantean tensions to a head. Dan Abnett's script relies on that long build-up rather well, and the artwork (by a combination of Briones, Eaton and Faucher) is reasonably attractive and tells the story well enough. Sadly it all feels a bit repetitive. There is an over-reliance on Atlantis in Aquaman going back for many years. There are numerous creative directions in which one could take a comic book about a water-breathing super-human who patrols the world's oceans. Only a few issues ago Arthur and Mera uncovered a portal to an ocean planet on the other side of the universe. That seemed ripe for exploration and adventure, but as soon as it was revealed that portal was closed.

I adore the Aquaman character, but I feel as if successive writers simply do not quite now the best way to push the character forward. I am enjoying Abnett's run, but I want something more interesting than what he is currently providing. (3/5)

Under the cut: reviews of Batman, Green Arrow, Heathen and Spider-Man.

With the Gotham Girl saga finally concluded, and "The Button" out of the way, Batman finally finds time for an epilogue to wrap up the past 23 issues and point in a fresh direction. It may not be the direction that readers expect. The bulk of this issue is a nicely observed, beautifully written tonal piece about who Batman is and why it is he does what he does, It ends on a surprising shift that, if permanent, will change the status quo of the character for years. I cannot really comment on that shift until I see what direction King takes it in, but the rest of the issue is a great, emotive read. (4/5)

"The Rise of Star City" hits its climax, as Seattle's new mayor goes full-blown Donald Trump on the populace and Oliver Queen makes an important choice to defeat the Ninth Circle's takeover of the city. This whole issue feels very slightly off. Percy's script goes wafer-thin on the political analogues, which tends to overtake the drama as a result. Ollie's climactic confrontation with the Ninth Circle feels rushed and a bit underwhelming. Ferreyra's art feels somewhat hasty as well, lacking the richness that usually leaps off the page. It's a reasonably entertaining issue, but that doesn't seem like enough when you know what the creative team could do at their best. (3/5)

Aydis and Shannon travel on one quest and Brynhilde and Sigurd on another. It is Brynhilde's encounter in a rural village that grabs my attention the most: a mob is about to burn a young woman at the stake for witchcraft, and Brynhilde's intervention is not only effective but also enables the series to once again hit on issues of medieval life from an LGBTI context. This is such a positive comic series in that regard, and something that is often sorely lacking on the American comic book landscape. That Alterici is such a distinctive and talented artist is just icing on the cake. This is one of the best comics of the year. (5/5)

Bombshell goes after Hammerhead with disastrous results, and that sends Miles on an ill-considered mission of revenge. This is a strong issue, with action and drama in addition to Bendis' standard snappy dialogue. It is good to see Miles' supporting cast continue to enjoy a fairly high profile as well. Oscar Bazuldua's artwork is proving a reasonable replacement for Sara Pichelli. He expresses the characters very well, which was one of Pichelli's great strengths as well. Oddly this issue is a great showcase for Hammerhead, never a villain I particularly cared about, and gives him a code of honour and a lot more personality than I have previously seen from him. (4/5)
Posted by Grant at 7:22 PM