Star Trek: The Next Generation: "Liaisons" 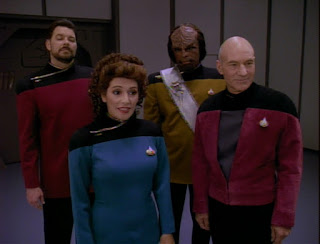 It is 27 September 1993, and time for another episode of Star Trek: The Next Generation.

The Enterprise plays host to three ambassadors from the planet Iyaara. One is paired with Counselor Troi (Marina Sirtis), and seems oddly obsessed with desserts. Another demands to be paired with Lieutenant Worf (Michael Dorn), and is an antagonistic boor. A third Iyaaran travels in a shuttle with Captain Picard (Patrick Stewart), only for them to crash on a nearby uninhabited planet. While searching the crash site Picard is struck by an electrical discharge, and wakes up the prisoner of an amorous castaway named Anna (Barbara Williams).

"Liaisons" is one of those Next Generation episodes where you can see what the writers (Roger Eschbacher, Jaq Greenspon, Jeanne Carrigan Fauci and Lisa Rich) were attempting to achieve, but its execution simply does not properly capture their intention. Instead of a surprising story of aliens trying to comprehend the emotional states of other species, the episode is dominated by Picard being held against his will by a mentally unwell woman desperate to have sex with him. The gender politics, even at the time of broadcast, felt a little odious and out of date.

Of course it is ultimately revealed that there is no one named Anna, but rather the Iyaaran pilot Voval (Alien Nation's Eric Pierpoint) using a form of holographic disguise to investigate human love. It all feels rather silly, and while it means the Fatal Attraction-style tropes never really happened as Picard believes, it does not erase the audience's experience of sitting through them. There is a nice bit of backstory at the episode's conclusion - Anna was a real woman and her story was taken from a journal found by the Iyaarans on a crashed freighter - but it does not make up for the tedium of the rest.

Back on the Enterprise events are slightly more entertaining, but still rather silly. Ambassador Loquel (Paul Eiding) obsesses over eating chocolate and other desserts, because he has been assigned to experience humanoid pleasure. That his definition of pleasure is restricted to eating sweets and ice cream feels oddly limited, and of course it plays on the annoying running thread of Troi being hopelessly obsessed with chocolate (itself a fairly outdated cliche). Paul Eiding's performance is engaging and upbeat, but he does not save it.

Michael Harris plays the third ambassador, Byleth, and probably has the strongest storyline of the three. Byleth is rude and dismissive to Worf, constantly chasising him, complaining about poor service, and generally making a nuisance of himself. He eventually provokes Worf to the point of violence, and which point he excuses himself to write up notes on humanoid antagonism. To its credit this story thread boasts the episode's one knockout comedy bit, as Data attempts to encourage Worf to be a good host to Byleth.

What the episode sorely lacks is any form of context on what the Iyaarans are like without human-like emotions. They are clearly not lacking in emotion themselves, they simply seem mildly studious and sedate. Without something working on the other side, all of their experiments on love, pleasure and rage feel terribly simplistic, and the episode itself broadly rather terrible.

Two episodes into Season 7, and neither have been much good. Fingers crossed the hit rate improves from here - otherwise this season is going to be a long rewatch.
Posted by Grant at 9:06 AM