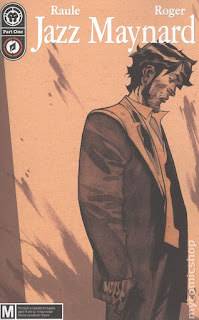 Quite a few European bandes desinees have been getting reformatted and released in American format lately. Add to that list Jazz Maynard, a new crime book by the pseudonymous Raule and Roger.

Maynard is a jazz trumpeter returning to Spain with his sister after many years away. He has just rescued her from a New York brothel, shooting a number of gangsters on his way, and while he's reached home his troubles have definitely followed him home.

There's a sort of ugly sexist tone to this first issue, visibly in the way it treats women - usually naked or half-naked - as collateral damage rather than proper characters in their own right. It may change in future issues, but for now it sets everything off on a slightly unpleasant foot. That's a shame too, since Roger Ibanez's artwork is stunning. It's reminiscent of both the anime Cowboy Bebop and the works of animator Peter Chung. The limited colour palette also gives it a great amount of atmosphere.

Repackaging bandes desinees as American comics is not my personal preference - I'd much rather English translations of the original paperback and hardcover volumes - but any exposure of European comic book creators to an English-speaking audience is a good thing. Something, as always, is better than nothing. (3/5)

Under the cut: reviews of Extremity, Night Owl Society and Planetoid: Praxis - as well as delayed reviews of Hulk and Southern Cross.

There is some beautiful world-building in this fourth issue of Extremity, which follows a family seeking revenge for their wife and mother across a post-apocalyptic fantasy world. With another one of the murderers tracked down, the strain of the endless revenge quest begins to put a dangerous strain on the family - and particularly on Rollo and Thea. I keep waiting for this comic to disappoint me, and every issue just further cements Extremity in place as 2017's best new comic. The art is imaginative, the plot has a tremendous momentum, and the Miyazaki-esque world that Johnson has developed is simply wonderful. (5/5)

Teenager David convinced his classmates to help him take down a local gang boss named the Viceroy, but when they discovered the Viceroy was David's father they all abandoned him. Now that the Viceroy has kidnapped David's sister - and his own daughter - David needs the help of his friends more than ever. Bak's art slips a little with the action, which is a shame as his character work is excellent. Everything comes to a surprising climax as well. I did not expect the series to end so soon, but Venhaus pulls it all together in an unexpected and mostly satisfying manner. (3/5)

A community of human and alien colonists have done their best to scratch together a living on Praxis: now the Heliocor corporation is forcing them off-world - and one group of colonists decide to take matters into their own hands. There is a slightly distanced tone to Planetoid: Praxis, which makes it feel a little as if we're reading about the events without ever quite engaging with them. Whether it is the fairly old-fashioned artwork or the relatively familiar storyline, it takes the shine off the book to a small degree. It's still great science fiction, but as the series has gone on it feels the quality has slipped just a little. (3/5)

Six issues have built up to this: the long-awaited reveal of Jennifer Walters' new Hulk form; talk about writing for the trade paperback. This is a reasonable enough climax to the first arc, but to an extent it feels a little too unresolved and open-ended. The monster haunting the apartment block fully reveals itself, Jen's Hulk persona takes over, and there's a bit of a fight. I think I wanted a little more. While the plot maybe struggles, the overall themes of grief and trauma remain and continue to be very effective. The ball might have been fumbled just a little, but it hasn't fallen. (3/5)

The second story arc of Southern Cross comes to an end as the Romulus mining rig comes to a nightmarish and sticky end. The shadow of Event Horizon has always loomed over Southern Cross, and even with this second arc stepping away from the doomed starship and onto the surface of Titan the influence has remained pretty clear. This is great atmospheric science fiction horror, and this issue in particular builds up a wonderful climax. Hopefully the wait won't be too long for the third arc to begin. (4/5)
Posted by Grant at 9:06 AM