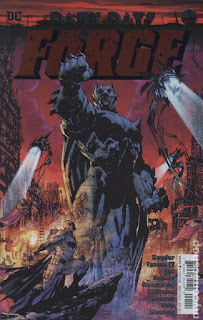 DC Comics have a high profile miniseries coming up called Metal, reuniting the Batman team of Scott Snyder and Greg Capullo. I tend to enjoy DC's events a lot more than Marvel's for two reasons: firstly they tend not to suck in every monthly ongoing into the storyline whether their readers want them to or not; secondly they are in almost every case vastly superior stories. For some reason DC seems to get the events a lot more instinctively than Marvel do.

Metal is not quite here yet, but Dark Days: The Forge is. It is a prologue issue that sets up some mysteries, teases some new characters and lines up a broad-ranging cast of popular DC heroes. It is co-written by Snyder and James Tynion IV, and illustrated by a cavalcade of A-list art talent.

It is a mixed success. Some elements work, and some really do not. It is nice to see Carter Hall, aka Hawkman, make an appearance in flashbacks, and indeed it appears the mysterious 'nth metal' that powers Hawkman's flight may be a key factor in the series. There are also roles for Batman and Aquaman, Green Lantern and Duke Thomas, and even a few surprises thrown in. The mysterious 'immortal men', who are getting their own ongoing series on the back of Metal, make no great impression at all.

The book is a little pricey at US$4.99, but to DC's credit it comes in an attractive cardstock cover and does have a fairly lengthy page count. It doesn't satisfy as a book in its own right, but as a teaser of things to come it stimulates reader interest pretty well. If you're planning on reading Metal it's probably best to get in on the ground floor. (4/5)

Under the cut: reviews of Doctor Who: The 11th Doctor, Freeway Fighter and Ms Marvel.

The Doctor, Alice and the Sapling arrive at a massive deserted spaceship - one that appears to be so large on the inside that it contains a dying sun. This is very much an introduction chapter: the TARDIS arrives and its occupants explore their new surroundings. There's an intriguing new monster and a mystery to solve. It's all reasonably fun to read, and Culbard's artwork has a distinctive charm to it. I still feel this third volume of the 11th Doctor's adventures is not hitting the heights of the second, but things do seem to be improving. (3/5)

Freeway Fighter is a wonderfully nostalgic comic book. It's not the most original comic on the shelves, and the art - while great and well-suited to the action - is not going to steal it any headlines. It is, however, solid pulp entertainment with a post-apocalyptic storyline heavily inspired by George Miller's Mad Max. For fans of the original Fighting Fantasy gamebooks it has some great additional material, including background information on the original book and an introduction by author Ian Livingstone, (3/5)

The celebration of Eid Mubarak coincides with a disturbing new development in Jersey, as ex-Hydra agent Chuck Worthy successfully takes over as mayor and begins enacting a super-powered crackdown over the city. Marco Failla's artwork fits wonderfully with the long-established house style of Ms Marvel, and the storyline picks up a bunch of plot threads I honestly didn't expect to see back. It's a great launching point for a new storyline. (4/5)
Posted by Grant at 11:42 AM