Who50: "The Talons of Weng-Chiang" 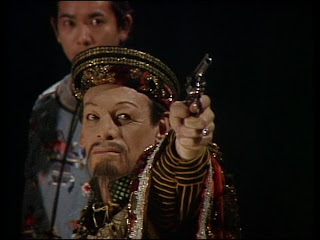 Who50 counts down to the 50th anniversary of Doctor Who by reviewing my favourite episodes and serials over the history of the programme, counting down from #50 to #1. Today, #12: "The Talons of Weng-Chiang", a six-part 1977 serial written by Robert Holmes and directed by David Maloney.

Last week I mentioned that Season 14 was likely to come up again, and here it is with this six-part season finale for Doctor Who's greatest ever year. It is up there with "The Green Death" and "Planet of the Spiders" in terms of nostalgic memories: they were "the one with the giant maggots" and "the one with the giant spiders". This is "the one with the giant rat". Of course it's a dreadfully unconvincing rat, represented either by an actual rat superimposed with blue screen or by a cuddlesome soft-toy prop, but when you're eight years old the production values are pretty much irrelevant when Leela is being stalked through the sewers of 19th century London with the mammoth rodent in hot pursuit.

Doctor Who seems built for the 19th century. It's a period setting that matches perfectly what the series does best: a well-mannered British-accented lead, dark shadowy corners, gothic horror, and so on. It's a period the series has tackled a number of times, in "The Evil of the Daleks", or "The Crimson Horror", or "Ghost Light". "Weng-Chiang" does it best. It's one of the series' most marvellous attempts at pastiche, drawing in such elements as Sherlock Holmes, Fu Manchu, 1970s kung fu and The Phantom of the Opera. Unusually for a six-part story it's incredibly well paced.

Of course if I am to praise "The Talons of Weng-Chiang" I feel morally obligated to also address the elephant in the room. First aired in 1977, this serial features as one of its villains actor John Bennett - very much white - playing a Chinese man named Li H'Sen Chang. That he does a brilliant job in the role doesn't really mitigate the awful racism of this. That Robert Holmes deliberately writes a script that actively has the character mock the Chinese stereotype also isn't really an excuse. It could be argued that historical context is a factor; remember that in 1977 the BBC's notorious Black and White Minstrel Show was still on the air.

It's this one notorious element that stops "The Talons of Weng-Chiang" from being in the all-time Top 10, or even Top 5. I can forgive it, and certainly John Bennett's performance is outstanding, but it does leave a sour taste in the mouth when viewed from a 21st century perspective. Other than that, this is as damn close to perfect as Doctor Who ever came.
Posted by Grant at 9:06 AM