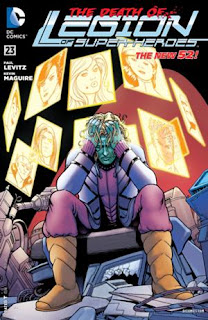 With its 23rd issue this week, Legion of Super-Heroes has concluded its current run. There was much wailing and gnashing of teeth by old-school DC fans when its cancellation was announced, although I'm not entire sure why. This was the seventh volume of Legion. Volume 6 lasted for 18 issues, and Volume 5 for 31. Then of course there's Adventure Comics (14 issues), Supergirl and the Legion of Super-Heroes (21 issues) and Legion (38 issues). Basically in the 13 years of the 21st century, DC Comics has relaunched Legion of Super-Heroes six times. For those without a calculator handy, that's a new Legion comic every 2.2 years. That in mind, I'm pretty certain we'll see a new version of the team sooner rather than later. The fans can quit their bitching.

So how was this final issue anyhow? To be honest, a bit of a mess. It's pretty much all epilogue - in fact the second half seems actively made up of individually titled epilogues. Kevin Maguire provides the art, but the job feels a bit rushed to be honest. Perhaps his heart wasn't in it.

Paul Levitz writes a reasonable script here, but it's certainly nothing exceptional. I think a lot of its potential strength is wasted by the reader's knowledge that there's going to be a new Legion along eventually. It's a heartfelt farewell issue for a comic that, to be honest, never really earned it. (3/5)

It may go down as the most depressing story arc in the entire history of Batman, but this has been an exceptional run of comic books. They have followed Bruce Wayne's emotional journey through the trauma of losing his son, starting with frantic attempts to somehow bring him back from the dead and culminating here with a calm acceptance that he cannot change the past. I think it's perfect that the co-star for this issue is Nightwing, the original Robin and his original adopted son. There's also a perfectly realised and effective epilogue for Alfred which I really appreciated: he really is the emotional backbone of the Batman family. (5/5)

To get my one criticism out of the way first, this comic's narrative moves incredibly slowly. I like the story that Williams and Blackman have been telling, but on a month-by-month level it's actually a bit of a drain. I suspect it will work much better in trade paperback form. This issue is divided between Kate and Maggie restoring their trust in one another, and Bette and her team continuing their preparations to take down the DEO. It's great stuff: good artwork, beautiful characterisation and smart storytelling. (4/5)

Daredevil and the Silver Surfer! It's the team-up everybody always wanted! Well, probably not - in fact Matt Murdock makes the observation in this very issue that he's never actually met the Surfer before. It's a really odd pairing, given one of them is about as urban as Marvel gets, and the other about as cosmic as Marvel gets. This is a fast-paced, bright and hugely entertaining one-off issue that was an obvious four out of five comic book. That is, until the absolute gut-kicker of a final page that pushes it up to five out of five and then some. (5/5)

He-Man and the Masters of the Universe #5

I purchased the first four issues of Masters of the Universe purely based on nostalgia: I bought the toys and watched the cartoon as a kid. This comic hasn't actually been particularly good, however, and I've been vacillating over whether or not I should stop reading. This issue, then, was an enormous surprise: it's a well-written and nicely illustrated book with witty dialogue, great plot and character development and the kind of promise that may just see me stick around for the second story arc. This book isn't perfect, and to be honest I wouldn't recommend it unless you're already a big MOTU fan, but for one issue at least it's become genuinely great. (4/5)

This fifth instalment of "Trinity War" is better than the last. It's still not exceptionally good, but it's at least an entertaining read. For one thing it seems to use John Constantine much more effectively than the way he's being treated over in his own book (which I've stopped buying). It also leads to a nice cliffhanger, although it's obvious at this stage that this crossover is simply the entry point to September's Villains Month and the next mini-series event Forever Evil. So basically what Marvel did with Age of Ultron. What I wouldn't give for a nice self-contained event mini-series for a change. This is getting very old very fast. (2/5)

All up this is a very laid-back issue of Revival, high on character development and tone but low on horror and tension. I liked it a lot: Seeley and Norton manages to give the whole issue quite a creepy, sinister feeling - as if we're rapidly heading to something dreadful, yet the penny hasn't quite dropped. I'm a big fan of Norton's artwork. It's expressive and detailed and reminds me a lot of the great DC Vertigo comics of the 1990s. (4/5)

Wonder Woman, War and Orion face up against the Firstborn in the ruins of London. This issue is all climax, with unexpected results and a provocative new status quo for Wonder Woman by the end of it. It's also wrapped up in my favourite cover of the week. I'm really keen to see where Azzarello and Chiang are taking this story - I'm guessing next month's Firstborn one-shot will illuminate some of that future direction nicely. It's one of the few issues in Villain's Month that I'm actually keen to see. (4/5)

This is the kind of X-Men comic I like: essentially a super-powered soap opera, with more time spent on developing the cast's personal lives than on fighting some diabolical alien menace. This book is split into two halves. The first follows Jubilee, her adopted baby son Shogo and Wolverine spending a day in Los Angeles. It's delightful, heartfelt and warm. The other half follows the remainder of this book's all-female team as they resolve simmering tensions left over from last issue's climax. This is a great comic book and I strongly recommend readers get on board while it's still early. (5/5)

David Haller's made a big impact fighting mutophobia in the United Kingdom - now he's faced with a one-on-one with his estranged mother. Like Daredevil this issue has one hell of a kicker by the end, and it's got me eager to see what happens next. We shouldn't overlook the rest of the issue, however, which is a great summation of Haller as a character: his origin, his relationships and his past history in the X-Men comics. This is a clever, interesting comic book that deserves to be selling a lot better than it is. (4/5)