Under the Dome: "Imperfect Circles" 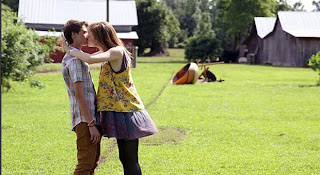 The police are on another manhunt, this time for the Dundee brothers after they murdered Rose and attempted to rape Angie. A pregnant woman sees a vision of her absent husband, only to enter premature labour the moment she touches him. Big Jim's authority over the town comes under a new threat. Joe and Norrie track down the centre of the dome, opening an all-new mystery as to its origin and purpose.

"Imperfect Circles" marks the midpoint of Under the Dome's first season, and a fairly seismic shift in the sort of story that the series is telling. This is what I wanted in the first place: less soap opera theatrics, and more strange goings-on and weird phenomena. I suppose the main question now is whether this is a permanent upturn in the series or a once-off aberration.

So let's start off with how the dome is going. At the centre of the dome there is a second dome. Inside that dome there is an egg. The dome also appears to be sentient - or at least semi-sentient - and can manifest as images from its prisoners' minds. It can also, going by the climactic events of the episode, kill anyone it chooses at any time. That's kind of terrifying.

After a few weeks of growling and sulking his way through the series, Big Jim takes an enormous step back to the kind of dangerous antihero I think many of us expected him to be. His power over the town gets a serious whacking by the ambitious Ollie Densmore, and Jim's response to this provocation immediately made the character interesting again.

The other key development this week is the death of Norrie's mother Alice, shortly after delivering the premature baby. It was deeply weird and creepy, heavily implying that because the town got a new baby resident, the dome felt obliged to take a resident away at the same time. I was wondering after last week's insulin shortage how they were possibly going to keep Samantha Mathis' character going. Turns out their solution is that they're not.

Ultimately I was struck by just how much this episode felt like Lost. It wasn't just because of the mysterious egg, which let's face it is effectively the hatch from Lost's first season in narrative terms, but also the music-based montage at the episode's end and the last second cliffhanger where the egg looks set to hatch. While I'm happier with an Under the Dome that echoes Lost than one that echoes... well whatever the hell it's been echoing the past few weeks, I do hope that answers are more forthcoming.

All up, this is a good episode. That makes four good episodes out of seven, or 57%.
Posted by Grant at 9:23 AM