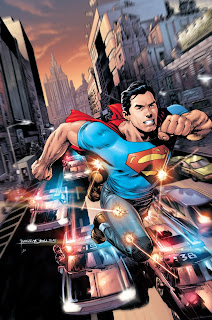 This week I took a small plunge and dropped my standing order for Action Comics. I'm usually pretty bad at dropping titles, so this was a pretty big step for me. I'm not sad to see it go, however; I can spend that US$3.99 on a comic book I actually like.

I had very high hopes for Action Comics when the New 52 launched. I loved the idea of a young street-level Superman in jeans, work boots and t-shirt, and really enjoyed Grant Morrison's first arc on the book. Then it seemed to get bogged down in a complicated time-travelling, inter-dimensional mess, and by the time Morrison's run wound up I was feeling pretty ambivalent about the title. Then they announced Andy Diggle as the lead writer, something which lasted precisely one issue. Now they've got Scott Lobdell writing a fairly tedious fill-in storyline until Greg Pak can take over in a few months' time.

Why is it so difficult for DC to get this book right? By all rights it should be a company flagship, particularly with Man of Steel earning truckloads of cash in cinemas this year. I guess it's par for the course for the company these days, when they can't tie their own shoelaces without accidentally cutting their own foot off at the same time. There's a useful website I discovered yesterday: Has DC Comics Done Something Stupid Today. At the time of writing the answer is "yes", since they've just announced that they've massively short-printed all of September's 3D covered "Villains Month" titles, with the remaining copies getting printed in 2D covers with a dollar off the cover price. I don't know about you, but I'd have ordered a lot more of those villain books if I'd known they were going to be a whole dollar cheaper.

One of the appeals of the X-Men has always been that, once you strip away the superpowers and the action, it's basically a soap opera. This issue certainly wallows in that, with Jean learning that Beast is in love with her and Iceman and Cyclops heading out into town to flirt with some locals. To put it another way, this issue is what Bendis does best: character interplay with a nice amount of warmth and humour. I'm not fully sold on guest artist David LaFuente - it's all just a little bit too cartoony compared to the book's usual look. (3/5)

I have absolutely no idea why DC is pursuing this title. At first it was an engaging African superhero story that wasn't finding an audience. Now it's a pointless Batman clone that still isn't finding an audience. Why its cancellation hasn't been announced is beyond me. This issue is just more of the same: Lucas Fox looks like an irresponsible jerk because he can't tell his father that he's Batwing, he faces off against another villain, everything ends in a cliffhanger - except that I don't care. I did really like Batwing once upon a time. It's just tedious now. (1/5)

The first story arc of this eight-issue miniseries comes to a neat close, and it's been a wonderfully entertaining story. Quite why Marvel felt the need to publish it as three issues of a miniseries rather than as a self-contained annual or one-shot is beyond me. Whatever their reason I'm glad they published it. They've really been excelling themselves with Daredevil in the past few years, either via this, Mark Waid's ongoing or Bendis and Mack's outstanding End of Days. (4/5)

While facing the Wraith as Batman, Bruce Wayne also fights his new enemy during the day in the boardroom. It's a well-worn idea but one that always seems to work; Bruce Wayne's daytime persona is one that the Batman books sometimes fail to remember about, which is a shame since it's half his character. This issue builds to a great climax, so I'm really keen to see how it resolves next month. The Man-Bat back-up strip is also really entertaining, and for once I'm glad to have the back-up strip there. (4/5)

I have really been enjoying Green Lantern with Venditti at the helm. It feels re-energised and refreshed after so long under the control of one writer. I'm even enjoying reading about Hal Jordan as the lead, which isn't something that happens too often - it may have helped that most of his conversations this issue were with fan (and personal) favourite Kilowig. I always felt the title worked best when situated somewhere between Star Wars and Hill Street Blues, and I think he's hitting pretty close to that point. Tan and Friend are doing an exceptional job with the art as well. (3/5)

With the latest threat eliminated last issue, the various scientists of the Manhattan Project all return to their own experiments. It's finally clicked this issue why this comic titled Manhattan Projects, since each member of the cast is carefully working on his own mad scientist masterplan. After the rush of issue #12 this one does feel a little anti-climactic, but it pushes the plot along well and hopefully things will pick back into gear next month. I'm still digging the hell out of this book. (3/5)

The Movement got off to a strong start, then got quite shaky for two issues, and I'm happy to report it's now back on a stronger footing again. This is a great climax to the first storyline, as the masses converge on the police headquarters and the Movement race to free their captive teammate. The issue's final page suggests a much bigger storyline to come that has enormous potential - I hope DC give this book enough time to fulfil it. (4/5)

Surprise of surprises, this month's Stormwatch actually acknowledged the existence of the previous team. It's unclear why they did, and I can't tell whether they're going to flip back or if they're just openly admitting they did it, but either way I'm glad it hasn't been entirely swept under the carpet. As for the actual plot of this issue? It's okay, kind of dull, and doesn't seem to go anywhere, but I didn't hate reading it. It's just... meh. (2/5) 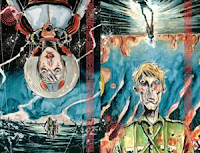 This is the point where I'm supposed to 'last but not least', however 'not least' is seriously underselling what it is the best comic of the week. Only last week I was reading Vertigo's new monthly Collider and now this week I'm here again, reading the first issue of new Vertigo ongoing - and it's fantastic. This first issue features quite a cool gimmick: it's a flip-book. Read it one way and it's a 10-page strip about a shell-shocked war veteran in the 1920s. Read it upside down and it's a 10-page strip about a scientist in humanity's far future. How they interrelate is the fun of this issue: not just a gimmick but a gimmick that actively aids in the storytelling - that's no mean feat. Great writing and wonderfully distinctive art, both by wunderkind Jeff Lemire, make this a must purchase. (Plus it's another great science fiction comic. Take note, Hugo voters.) (5/5)