Under the Dome: "Let the Games Begin" 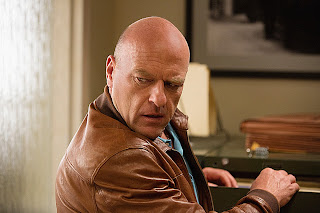 The villainous Maxine reveals her new plans for Chester's Mill to Barbie, starting with an underground 'fight club' at the old cement factory. Big Jim goes looking for leverage against Maxine, and comes face to face with a woman with a shotgun. Joe, Norrie and Angie go looking for the elusive 'fourth hand', the identity of whom comes as a complete surprise.

Actually that last sentence is a total lie. It's not a surprise at all, in fact it's the most obvious character it could possibly be, so obvious in fact that I spent the second half of this episode waiting for the inevitable twist that someone else was actually the fourth hand - but no, it's the one you'd expect and it happens exactly how you'd expect it. Despite my total lack of surprise, the 'mini-dome' arc turned out to be the strongest aspect of this episode, one that - while boasting some decent performances - was pretty much entirely derailed by evil Maxime and her evil Maxine ways.

Oh Maxine. She irritated me an awful lot when she was introduced last week, and I positively loathe her here. It's by no means the fault of the actress (Natalie Zea). I put the blame entirely at feet of the show's writing room, who collectively allowed this 'jump-the-shark' level colossal creative misfire to walk into the series and turn an uneven but watchable science fiction drama into a tedious farce. She's a cartoon villain; exaggerated, diabolical and most crucially utterly nonsensical.

I know this is a bugbear I harp on about every week, but seriously? The town has been isolated from the outside world for precisely ten days. The citizens of Chester's Mill have enjoyed comparatively stable law and order. They have electrical power and gas. They have food and fresh water. This town is in way too stable a situation to have reverted to building its own Mad Max-style Thunderdome in the space of a week and a half. Who are all these people beating the crap out of each other in the old cement factory? It's only five days since the entire population of the town was hiding down there from a tactical missile strike. And how has Maxine suddenly got so much power and influence when by her own admission she's been hiding away on a small island off the coast for the past week?

This series has become very silly, and an absolute chore to watch. I will watch through the final three weeks of the season, but as for Season 2 in 2014? I make absolutely no promises. This episode is an absolute stinker, leaving Under the Dome with five good episodes out of 10. That's 50%, which is pretty much right on the money for this perfectly mediocre series.
Posted by Grant at 3:02 PM