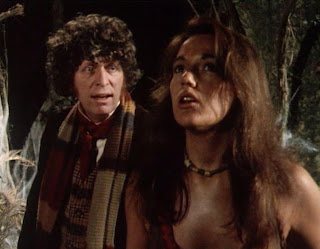 Who50 counts down to the 50th anniversary of Doctor Who by reviewing my favourite episodes and serials over the history of the programme, counting down from #50 to #1. Today, #13: "The Face of Evil", a four-part 1977 serial written by Chris Boucher and directed by Pennant Roberts.

I was looking over my list of the 50 top Doctor Who stories this morning, and it occurred to me that it's with this serial, which I've ranked #13, we really hit the stories where I can just watch and watch them endlessly and never get tired of them. I know it's usually neater for people to discuss their Top 10s of things, but when it comes to me and Doctor Who I really can't pare my very favourite adventures down to any less than 13, and this is the 13th.

"The Face of Evil" is, in many respects, the perfect Doctor Who story. It has interesting characters played by a strong guest cast. It has the Doctor on top form, being serious when he needs to be and funny when he's allowed to be. It's pinned onto a sensational science fiction premise, but it's focus is on the adventure rather than the science fiction. It boasts a wonderful script by Christ Boucher, later to script edit Blake's 7 and create Star Cops, and it's effectively directed by Pennant Roberts. It's also the debut story for Leela (Louise Jameson), one of the all-time best companions in the history of the series.

In "The Face of Evil", the Doctor is forced to confront one of his own past cock-ups. At some point - he's forgotten the entire incident - he encountered a crashed human space vessel and fixed its AI computer system for them by copying his own personality onto it. Generations later, and the computer system (named Xoanon) has gone insane, and the descendants of the human explorers have split into two camps: the primitive forest-dwelling Sevateem and the religious zealot Tesh. The first half of the story focuses on the Doctor working out what the hell is going on. The second half focuses on the Doctor trying to fix a civilization-destroying problem that he personally caused.

Leela is fantastic: between Boucher's writing, Robert Holmes' script editing and Louise Jameson's performance, she comes across as a remarkably smart, bold and canny character. She's primitive, yes, and broadly uneducated, but she's quick to learn and very independently minded. There's also a wonderful tension between her and Tom Baker's Doctor: she shows no hesitation in murdering her enemies, something that he strongly disapproves of her doing.

Doctor Who's 14th season is probably the best single year that the series has ever had. "The Face of Evil" is the third story from this season I've included in my Top 50 (the others were "The Deadly Assassin" and "The Robots of Death"), and I don't mind foreshadowing that there's at least one other serial from 1977 that's coming up in a few weeks. It's the perfect combination of elements for Doctor Who; what Terrance Dicks once described as "a combination of hectic menace and knowing self-mockery". Tom Baker is cleverly balancing humour with the serious moments, Leela is a great contrast from Sarah-Jane Smith (who exited earlier in the season), the horrific bits are really wonderfully creepy, and it's all underpinned by some nice science fiction concepts. While I adore all periods of Doctor Who, it was never as good as it was this season.
Posted by Grant at 9:07 PM