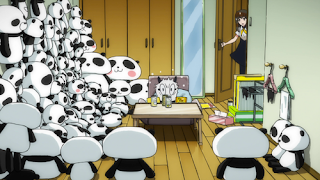 The second episode of Gatchaman Crowds is much stronger than the first; this time around things are deliberately slowed down, so that the audience finally gets the time to understand the concept and get to know the characters. It's almost a little self-contained domestic sitcom, with the straight-laced and rigorously disciplined Sugane stuck with the impulsive and overt new recruit Hajime. Episode #1 featured super-powered swordfights with alien entities. Episode #2 features a collage club. That's one hell of a right turn, but it improves the series immeasurably.

In many ways I think this series would make a better impression if the viewer watched the first two episodes in a row, as if they were a double-length premiere. That way the action is demonstrated, but the characters are fleshed out as well. There's also quite a big mystery going on: the Gatchaman team have been tasked with tracking down and eliminating a mysterious entity named MESS, but when Hajime interrogates this mission no one seems to be able to tell her why it is they have to destroy it.

The biggest addition to the series in this episode is the social networking website GALAX. Hajime is already neck-deep in using the system, whereas Sugane has never used it. Not only does GALAX track and share your day-to-day movements, it gives you a videogame score on your personal achievements as well. It feels like there's an element of social commentary brewing, which may or may not expand as the series goes on.

The relationship between Hajime and Sugane is shaping up to be a highlight of the series. He's a very rigid, rules-based person, and she has no compunctions about trampling all over his orderly world. She remakes his dinner. She makes friends with the MESS Sugane is trying to kill. She drags Sugane off to her collage club, where he manages to meet and interact with ordinary people for a change.

There's an introduction for a new character very late in the episode that suggests she's going to be the villain. We'll see how that shapes up in future instalments. The other character worth noting is Paiman, an alien that looks like a tiny panda, claims he hates pandas, yet has an enormous stash of toy pandas in his bedroom. It's genuinely funny stuff.

This episode was a considerable step up from the first, and it's got me interested in seeing some more of the series soon. So that's two episodes, with a 50/50 ratio of quality.
Posted by Grant at 5:04 PM