Under the Dome: "The Fourth Hand" 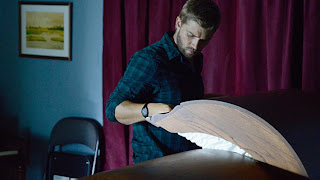 Joe, Norrie and Julia go looking for the mysterious egg - only it has vanished from its original location in the woods. After a resident of Chester's Mill is accidentally shot, Big Jim orders a buyback of the town's guns. Angie has a seizure, while the 'pink stars are falling' mantra turns out to have deep significance for Junior. Linda and Barbie follow a trail from a home invasion by a junkie to the late Reverend Coggins' drugs operation to Big Jim's propane store - and Barbie and Big Jim turn out to have a connection neither had anticipated.

You might guess from the above synopsis that a lot happened in "The Fourth Hand". This was a very busy episode, with a lot of plot development and some excellent work drawing the series' disparate elements into one strong direction. It also featured quite possibly the most irritating plot thread introduced to the series so far, one that irritated me so much that it damn-near derailed the whole enterprise.

Let's start with the good bits. Jim, Norrie and Angie are all connected via their seizures, the 'pink stars' line and now the clear indication that together they can open the small dome and reach the glowing egg inside - so long as they can find the fourth person that the small dome clearly needs. (Hence the "Fourth Hand" title.) There's a disturbing possibility that the fourth person just might be Junior Rennie, whose dead mother appeared to foresee the pink stars in dreams in the months before she died. This episode does a great job of dragging Angie and Junior back together, despite his actions in earlier episodes. It makes for deeply uncomfortable viewing.

It's great to see Linda do some independent investigating, dragging back some plot elements that appeared to have been discarded for a while. It's going to be interesting to see what happens once she manages to join the dots from local drug users to Coggins to the propane to Big Jim.

Sadly this episode also introduces a new character to the series in the form of crime boss Maxine, played by Natalie Zea. She's dressed like the cast of Sex and the City and has apparently been hiding in Chester's Mill for the past eight days. One assumed she kept hiding even when it seemed obvious that the town was getting hit by a tactical missile strike, otherwise surely Jim or Barbie would have seen her hiding in the shelter with everyone else. I also assume that despite being a decorated Special Forces veteran Barbie is actually incompetent at his job, since it turns out Maxine has been personally keeping him under surveillance all week - despite sticking out like a sore thumb in her expensive clothes and luxury sedan car.

I will bet money that, with five weeks to go on the first season, the production team were informed that CBS wanted a second season - and that Maxine is their attempt to complicate and sustain the Big Jim versus Barbie conflict for at least another 13 episodes. Whatever their motive, she's an element that doesn't work. She's incredibly badly written, and feels like she's walked in from a completely different series.

Still, all in all, one dire plot thread isn't enough to derail the whole episode. I'm giving this week's episode a tick of approval, particularly for the 'fourth hand' plot thread which feels rather like a 1980s Amblin film. We're nine episodes in, and Under the Dome has managed five good episodes out of nine (or 56%).
Posted by Grant at 9:55 AM